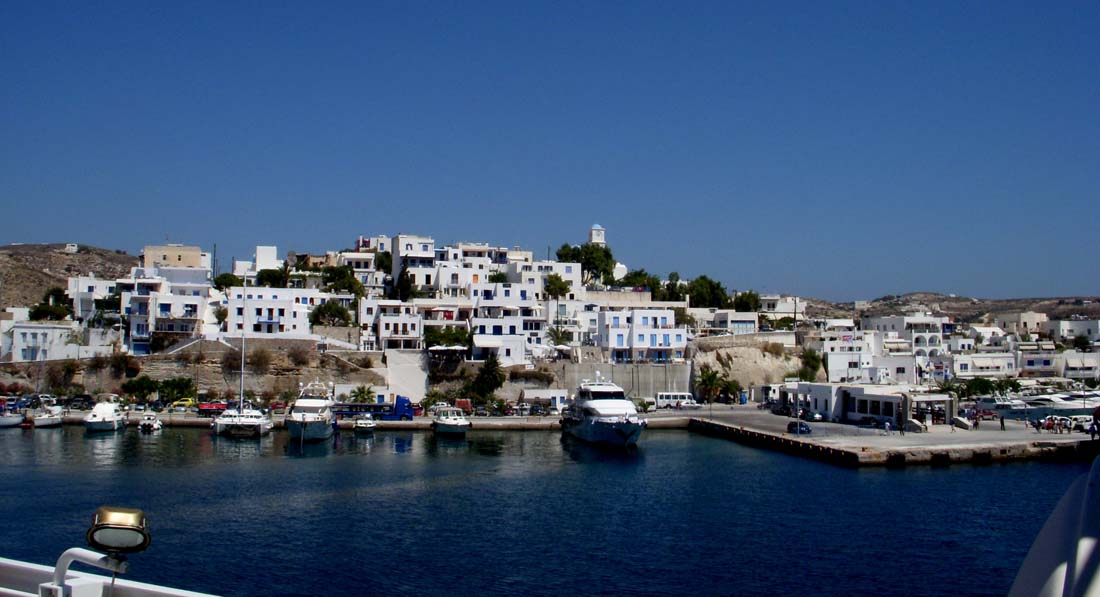 it is the main port of Milos and one of the largest natural bays of the Mediterranean. The settlement was founded in 1824 by Sfakia residents, who had fled to Milos chased by Turks, after a failed uprising in Crete. Today, Adamas is the commercial center of the island, with stores, restaurants, cafés, supermarkets and banks, as well as a nightlife pole of attraction, where the fun at the bars and the clubs lasts until the break of dawn. The beaches of Lagada (500 m) and Papikinou (1 km) are very close to the port for a last swim before your return journey. Adamas is only 4.5 km away from Plaka.

Built from the ancient stones of its fortress, 220 m above sea level, the capital city of Milos is famous for its Cycladic beauty and its romantic sunsets. Walking at the old neighborhoods with the cobbled streets, the quaint small shops and the chalk-white houses with the blossoming yards, you will feel the aura of times long gone, yet the lovely stores, speakeasies and restaurants of the area will bring you back to the present. Gazing at the sunset from the Venetian Castle and Mesa Panagia church on the top of the hill or from the marble-paved yard of Panagia Korfiatissa church on the edge of the cliff against the backdrop of the Aegean, is a must-do at Plaka. The same applies for a visit to the Archaeological Museum, where an exact replica of Venus di Milo is on permanent display. Plaka is 4.5 km away from the port of Adamas. 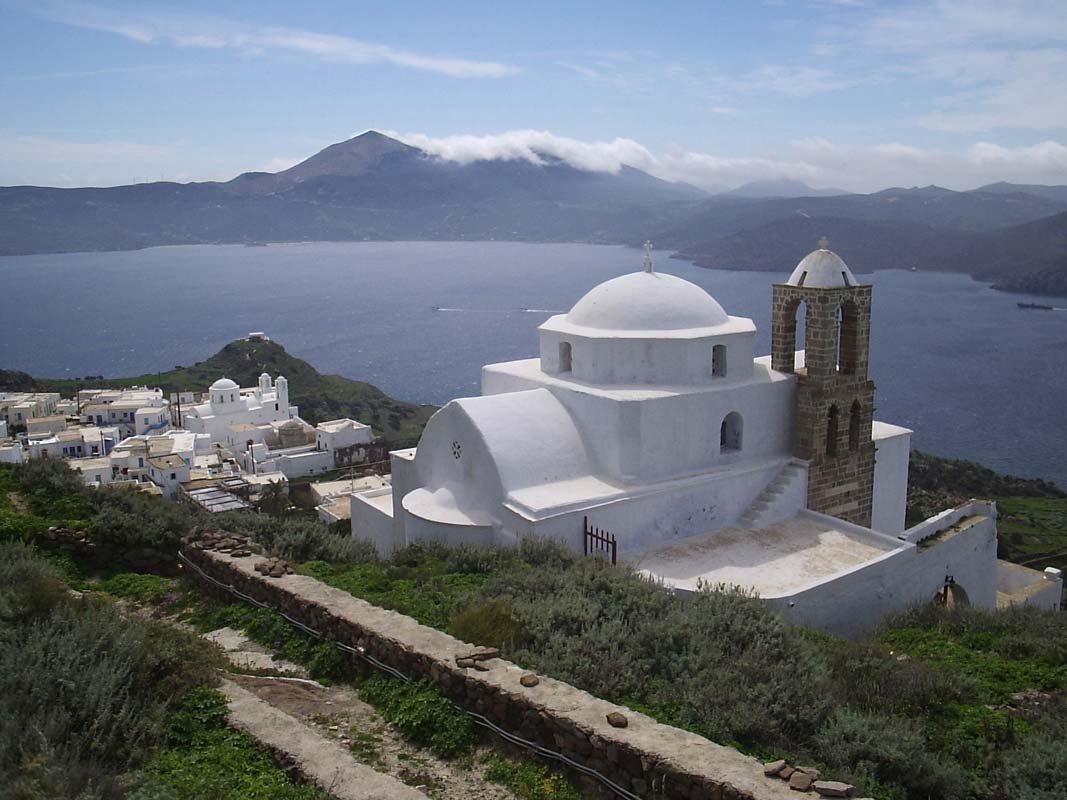 Its location on the hill of Profitis Ilias, in Plaka, is inextricably linked with the view to one of the most mesmerizing sunsets of Cyclades! The Venetian castle of Milos was founded during the 13th century by the first Duke of Naxos, Marco I Sanudo, for the protection of the island from pirate raids. The walls of the castle were actually the walls of the houses, while on its top, in “Mesa Kastro” (inner castle), there was the tower of the ruler in charge. On your way up to the old citadel, you will meet Panagia Thalassitra, a perfect spot to feast your eyes on the sunset at the bay of Milos. 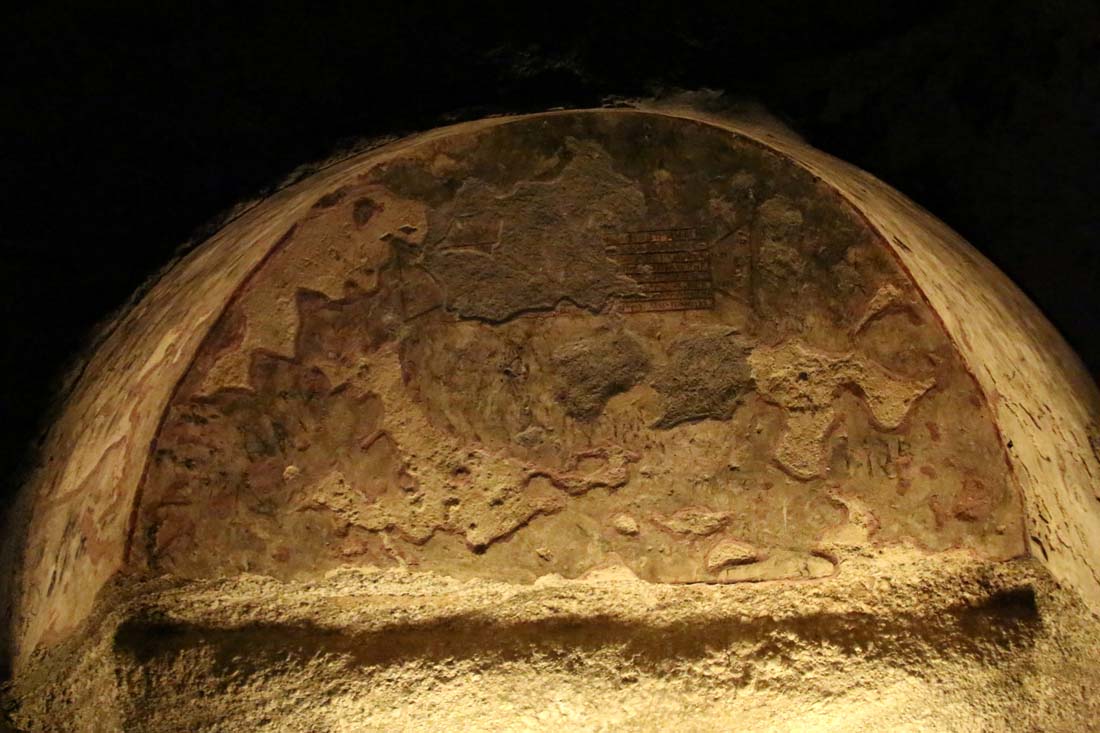 The catacombs near Trypiti are the third μεγαλύτερο early Christian monument after the Holy Land and the catacombs of Rome, while it is calculated that almost 8,000 Christians were buried in them. Dug into the soft rock of the area, 70 m above sea level, they constituted the greatest necropolis of the Early Christian Era in Milos. It is an intricate system comprised of three underground tunnels, five corridors and a burial chamber. The so called arkosolia, 126 sculpted arched tombs, are saved up to this day. Only the Chamber of the Presbyters is open to the public, in which the only two-leveled tomb and parts of the most important inscriptions have been saved. 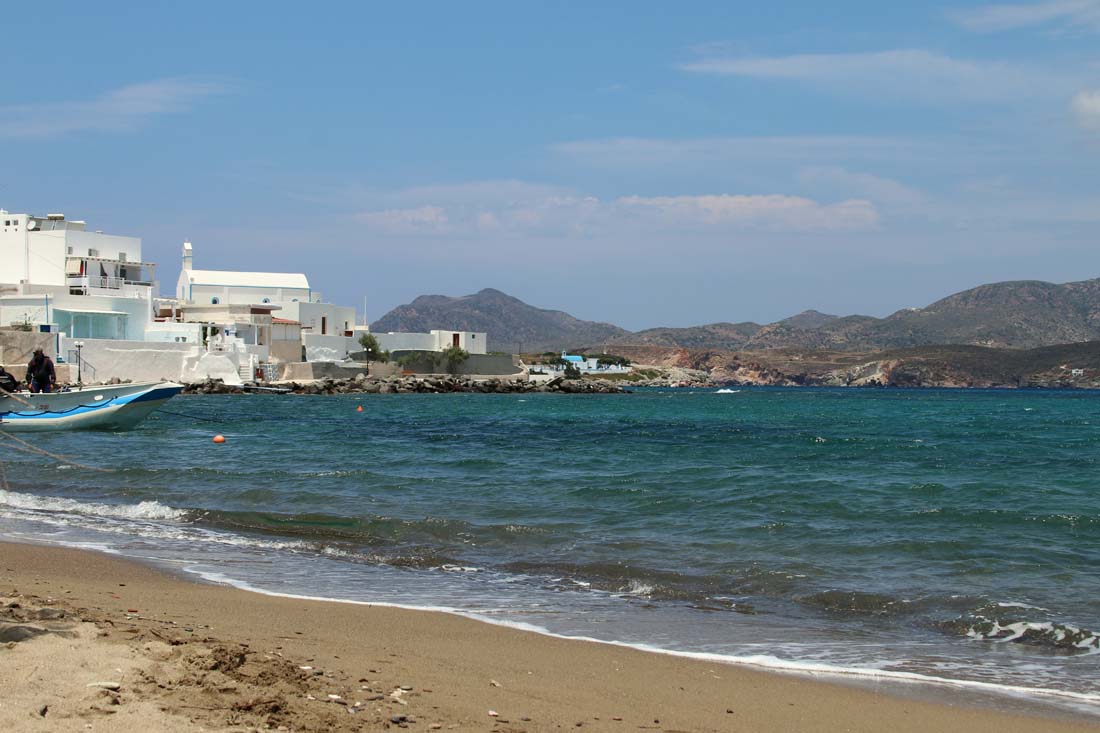 A quaint fish village at the northeastern tip of Milos, 10 km away from Adamas. This settlement stretches around a tranquil cove with velvety sand and a law-dropping sea, colored by small boats of local fishermen. At the seafront fish taverns, you can savor mezè dishes (traditional finger food) accompanied by ouzo, all the while gazing at the picture-perfect Aegean as the waves crash on your feet. Pollonia, which is the second port of the island, is the departure point for boats going to Kimolos, Glaronissia and Papafragas. You can also visit the nearby situated archaeological site of Filakopi. 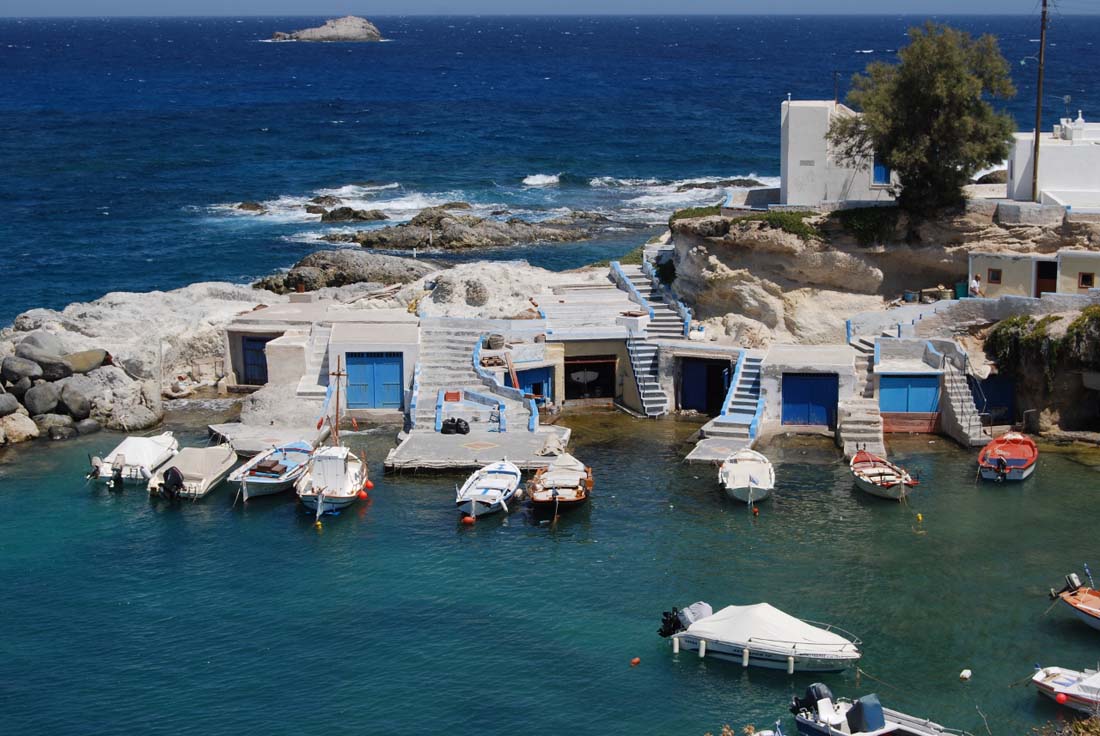 A symbol of Milos and typical sample of the folk island architecture in Cyclades! “Sirmata” are buildings dug into the volcanic soft rocks of the island, primarily used as warehouses for fishing boats during winter time, and later as residences of fishermen. The local fishermen were dragging their boats with wires (sirmata in Greek) up to the rock-hewn buildings with the colorful doors near the coast. Today, most of them have been turned into holiday homes, traditional guesthouses or storage rooms, adding to the charm of Milos’s landscape. You can see “sirmata” in Fourkovouni, Firopotamos, Empourios, Areti, Agios Konstantinos, Mandrakia and Klima.

The small fish village, the fame of which travels all around the world as one of the most photographed landmarks of Milos is located almost 4 km away from Adamas. In the “Venice of Milos”, as Klima is also known, you can find “sirmata” near the shore with two levels, colorful wooden doors and banisters. 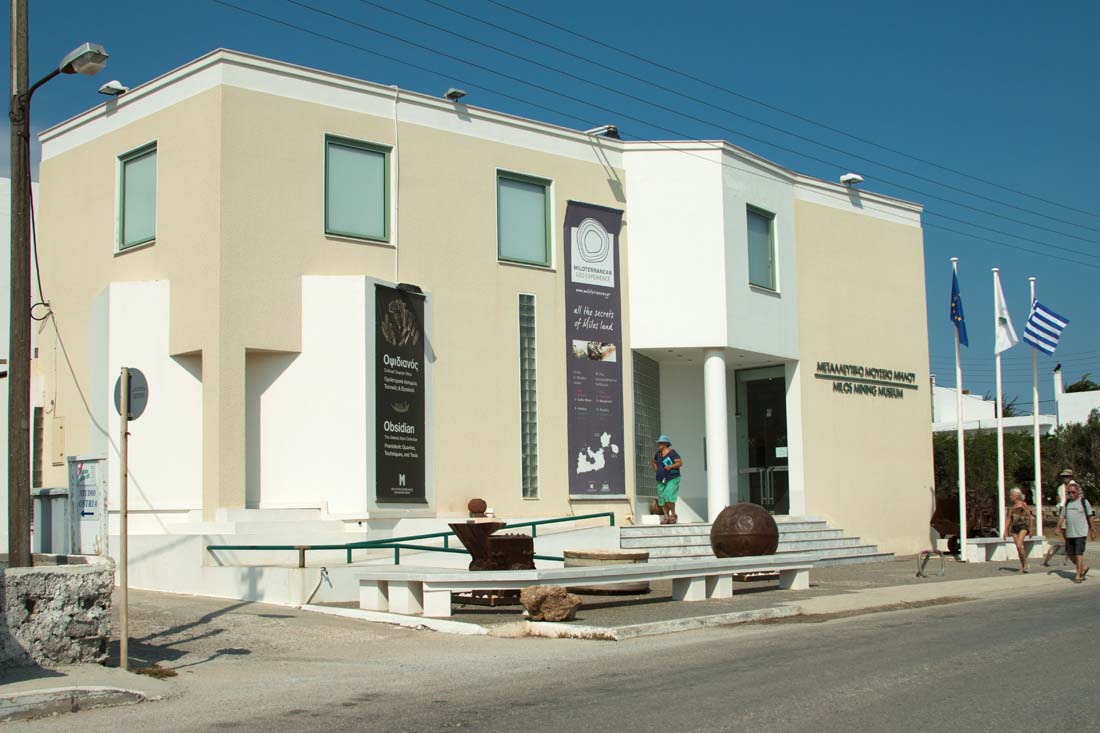 Milos Mining Museum was founded in 1998 in Adamas, in order to showcase the geomorphology and the abundance of mineral resources in Milos. The mining history of the island and the present extractive operations are demonstrated through photographs, tables, charts and tools on the ground floor of the building, while several minerals of the Milos’s land and a collection of artifacts made with obsidian (locally-sourced volcanic rock) are on display on the first floor. The museum also boasts a projection room and a hall hosting educational programs and special exhibitions. The activities of the Mining Museum, among other things, include geology-centered walks through the Miloterranean Geo Experience, with special guided tours in 7 charted routes of geological and mining interest. Tel.: +30 22870 22481 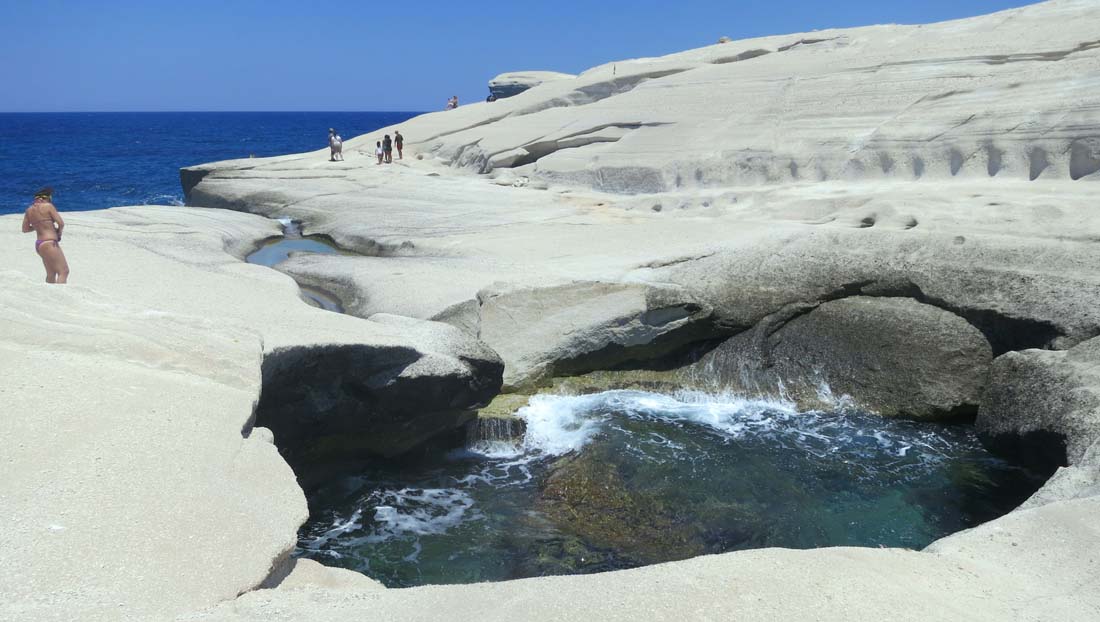 The landmark beach of Milos! The eerie lunar landscape with the pristine white sculpted volcanic rocks, emerald green waters and tiny stretch of sand at the northern part of the coastline is known in every part of the world through impressive photographs, attracting those allured by the lava miracle in the island of Venus. Sarakiniko is a 10’ drive from Adamas and Plaka. 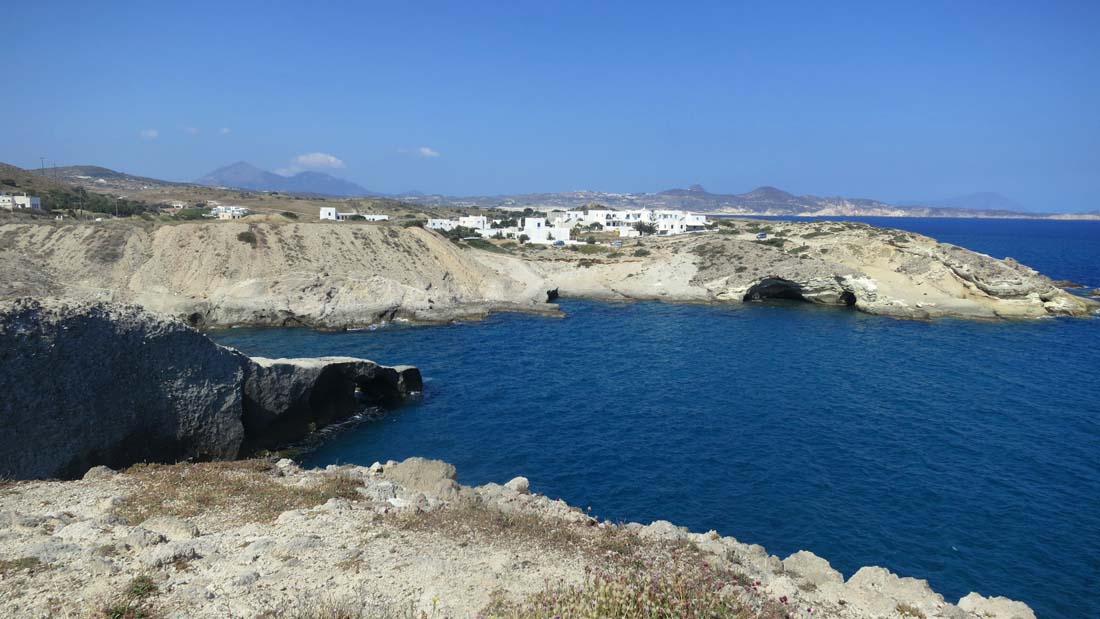 Named after a French priest (papàs in Greek), this famous beach is situated at the northern seafront of Milos, close to the ruins of Ancient Filakopi. Descending from the precipitous rock path may not be that easy, yet the scenery will most certainly redeem you… The clearest waters you have ever seen, huge vertical rocks chiseled by the salt water, three sea caves and tranquility in a narrow fjord, 7.5 km from Adamas. 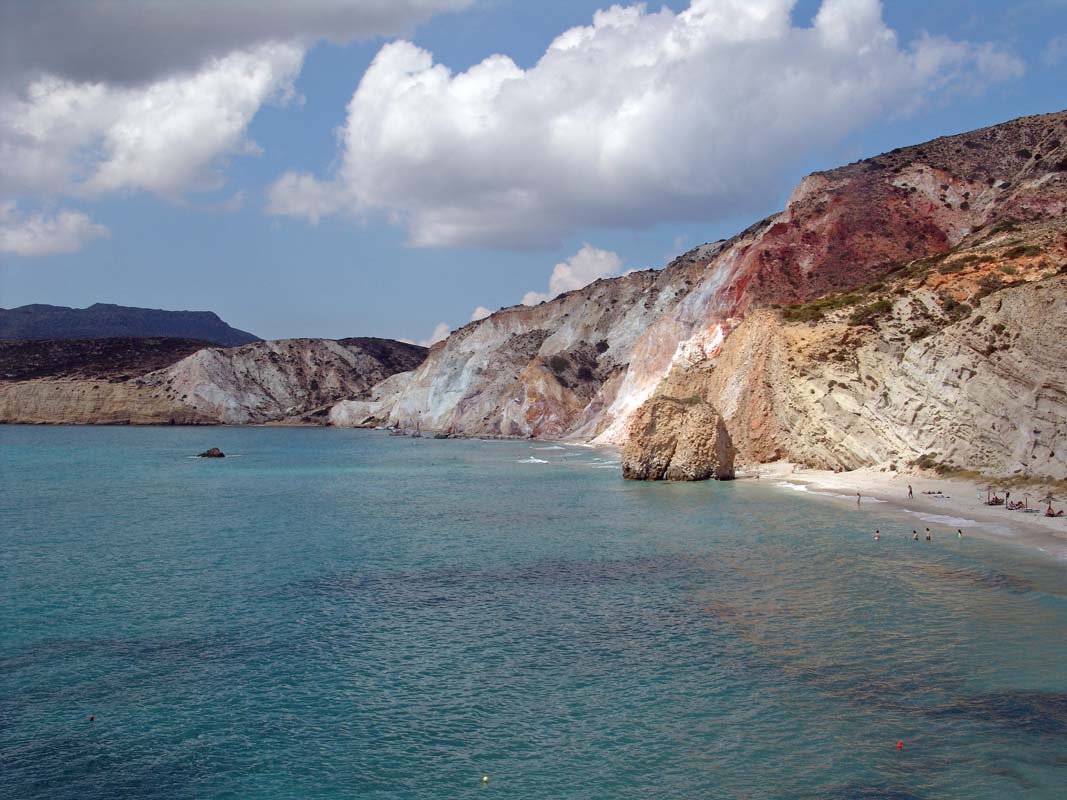 Almost 11 km away from Adamas, Firiplaka looks like a painting, as the color palette of the rocks hovering over the coast includes red, pink, yellow and white shades. A rock that was detached from the mountain separated it into two parts. The one is organized and “funky”, with youthful mood, while the other remains untouched and serene. Their common denominator is the gold and white sand and the white pebbles flirting with the shallow sea. 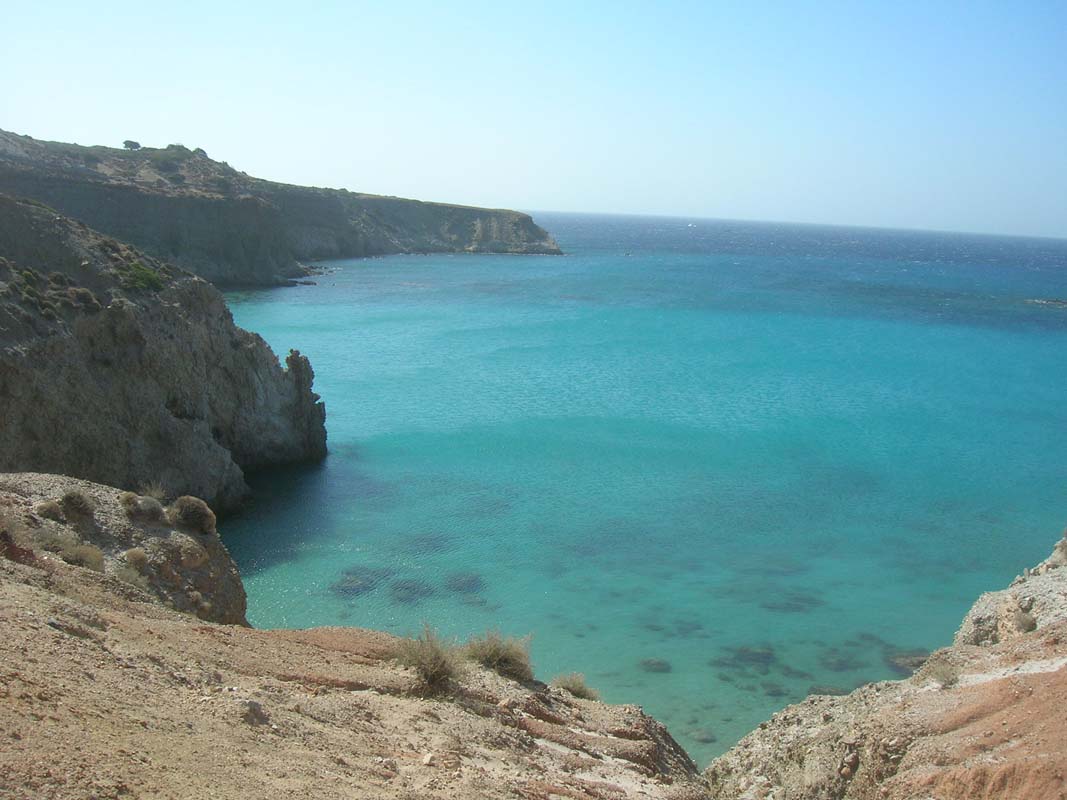 Anyone who has visited it, consider it the best beach of Milos by far. A slice of heaven, with sugary sand and exotic water hues, only approachable by difficult downhilling with rope and a wooden ladder. You must bring your own food and water supplies to the untouched Tsigrado. It is 11 km away from Adamas. 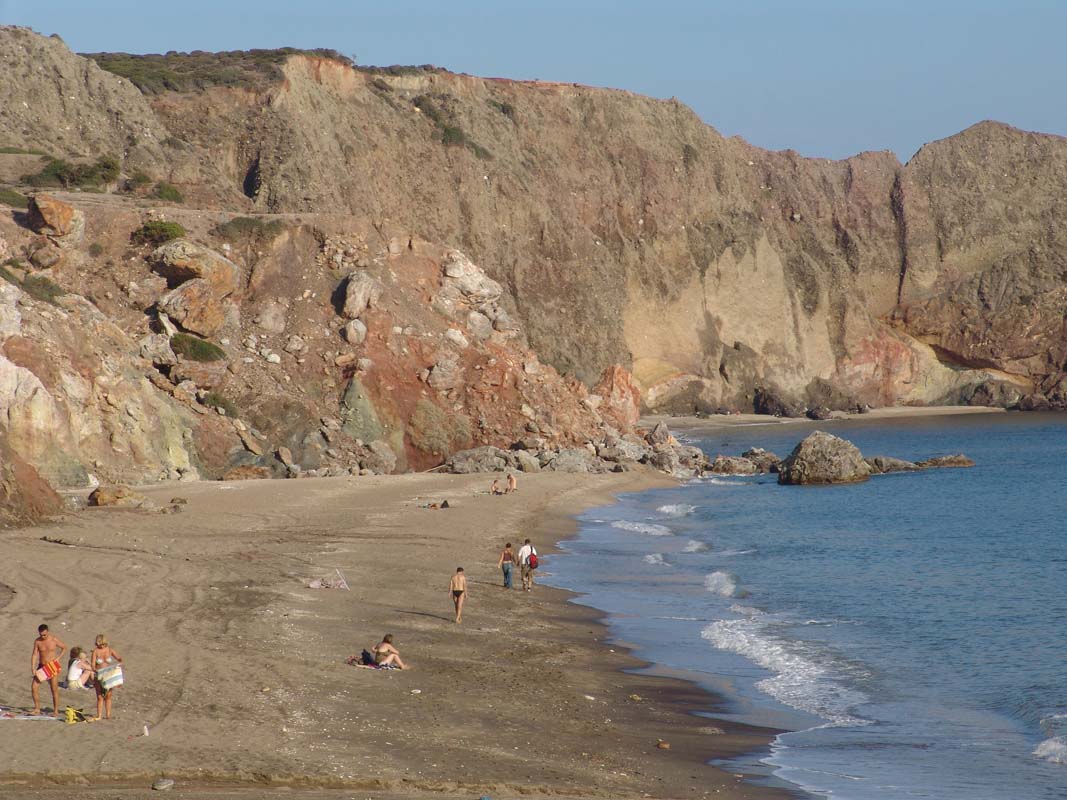 A popular shore of volcanic origins, with rocks in pink, red and yellowish hues, colorful glistening pebbles and a seabed teeming with warm fumaroles! For its most part, the Paliochori is organized with open-air bars and taverns, but also boasts a “virgin” stretch, for those who want to relax. There are also water sport options. Paliochori is 8 km away from Adamas beach. 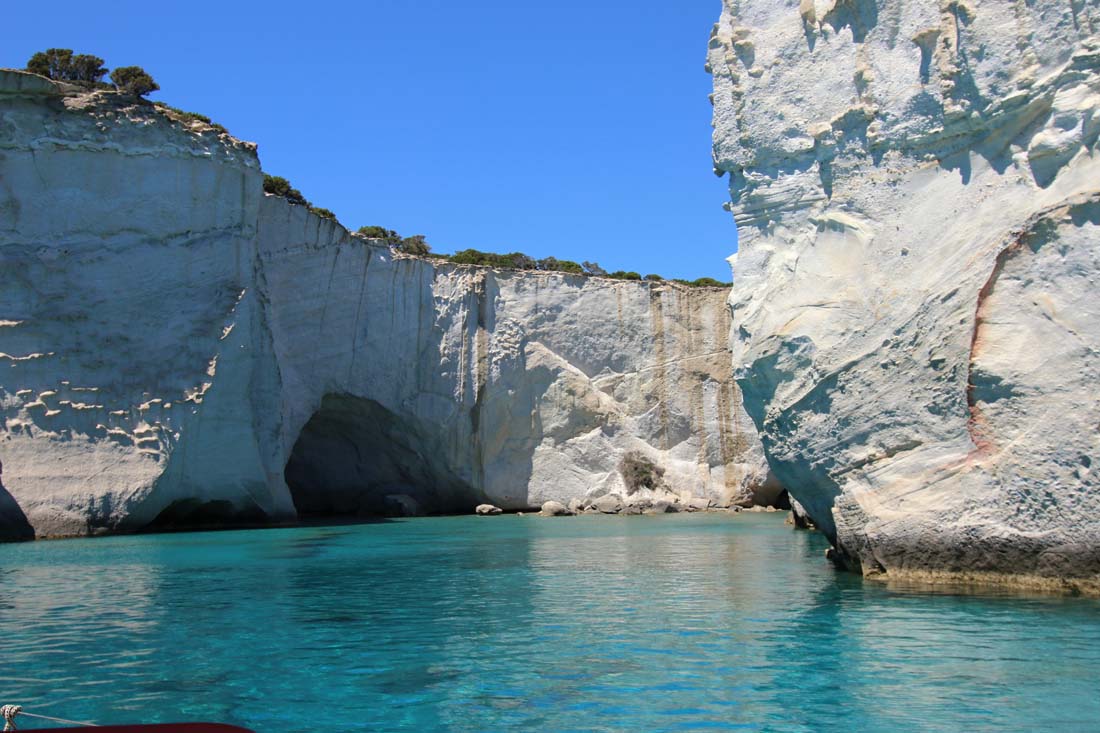 The “Sea Meteora”, as they call this volcanic miracle of nature at the southwestern tip of Milos, includes imposing grey and white rocks in strange shapes, caves and crystalline waters. This old pirates’ lair, where buccaneers of the Aegean used to anchor their ships —hence the name Kleftiko, a derivative of the Greek word kleftis, meaning thief— is approachable only by the sea, with a boat from Adamas, Agia Kiriaki or Kipos as part of a daily cruise (you are offered sea masks, swim fins and underwater photographs’ option). Otherwise, you can reach Kleftiko by yacht or canoe kayak!

A popular large shore at the northeastern side of Milos, 8 km away from Adamas. The organized beach of Agia Kiriaki has sun umbrellas, sunbeds and beach bars, and it is also ideal for families with children as well as for those who want to indulge in water sports. Its deep blue waters are shallow to the middle of the shore, but deepen at its ends. 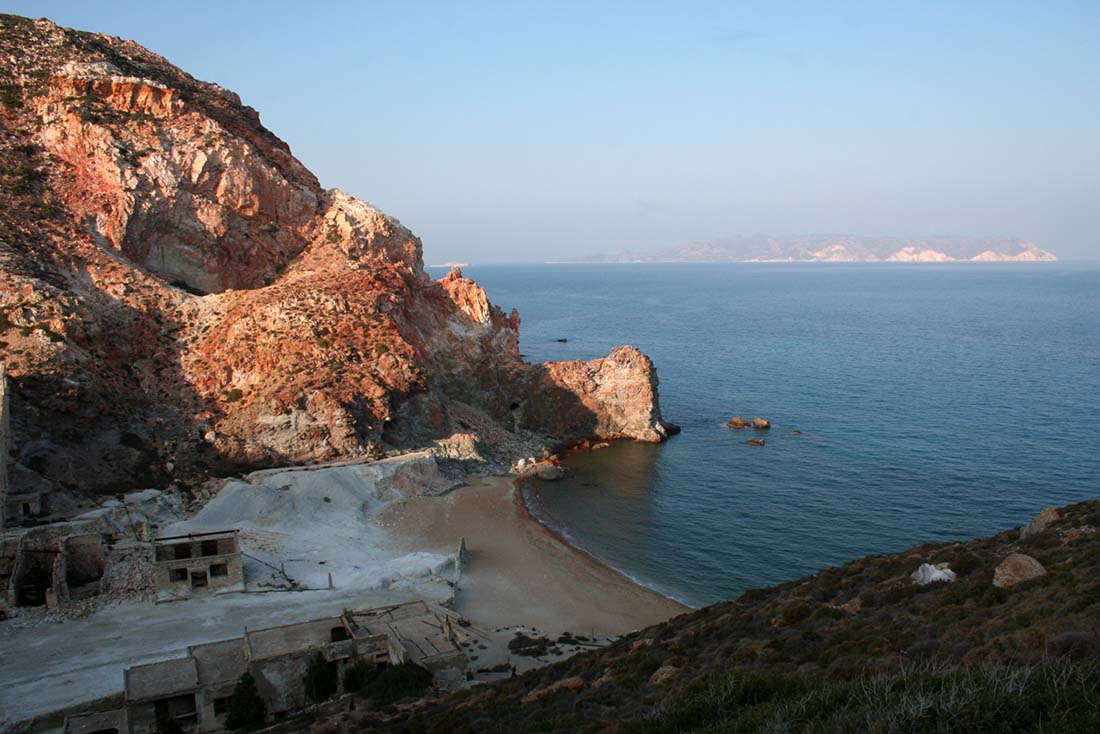 Yellow-hued pebbles and clear waters against the backdrop of abandoned sulfur mining facilities, old wagons, rails and time-worn, rusted tools, taking you to a journey in the past. This rough, moody scenery is located at Paliorema bay and can be reached by car from Adamas (12 km). Be careful on the last part of the route, as you will be moving on a bumpy dirt road. Of course, there is always the alternative solution of reaching Thiorichia by sea.