Chora on the edge of a cliff, a dreamy citadel and a Panagia Marian church with a stunning view. This is Folegandros… The rocky land of summer romances.

“This is nothing like the other, bustling ports of the Aegean”, you will inevitably think during your arrival at Karavostasis. The port of Folegandros, with its serenity and picturesque appearance, seems to have developed its own laid-back philosophy and an atmosphere of permanent summer bliss. This is where your journey to the “Iron Island” of Cyclades begins and ends. The pier is the starting point of the arterial road crossing Folegandros and leading to Chora (3,5χλμ.) and Ano Meria, as well as the coastal road crossing every beach south of the port. It is also the bus terminal, as well as the point of departure of small rental boats heading to the beaches of the island. At Karavostasis you will also find restaurants, cafès, bars, mini market, ΑΤΜs, lodgings and hotels. 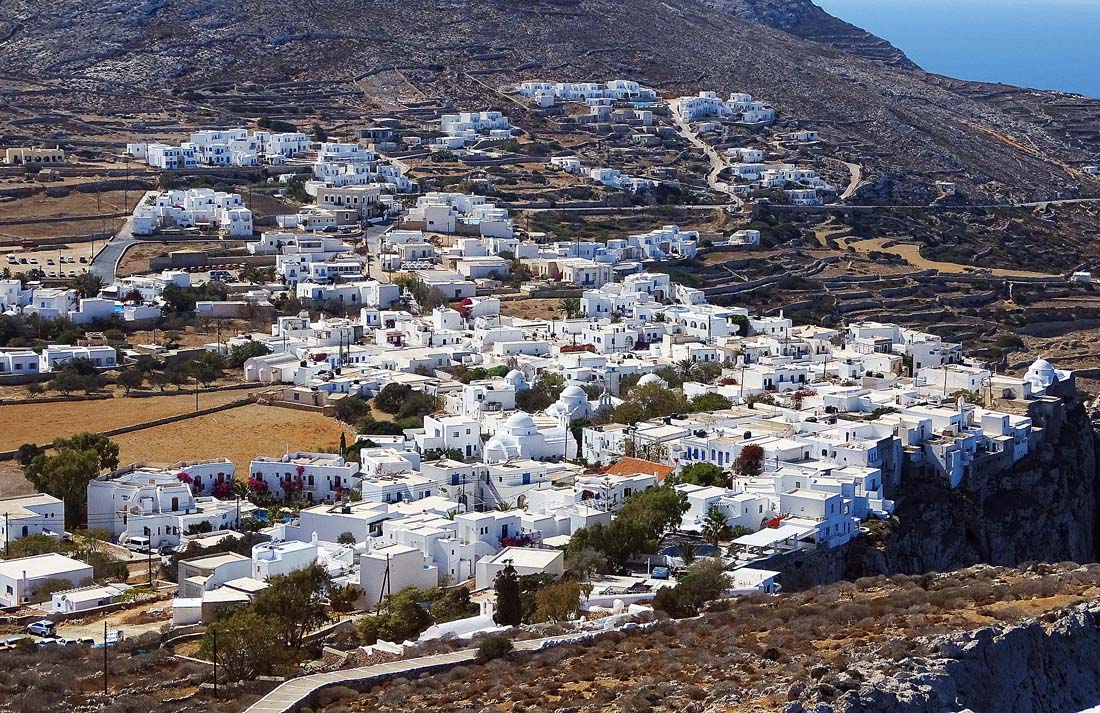 One and only word is enough to describe Chora of Folegandros: Dream. A vivid, Cycladic, unpretentious dream, perched 200 m. above sea level. A collage of colors, scents, cobbled streets, numerous churches, Cycladic whitewashed houses with small quaint courtyards and a inhabited medieval Kastro unraveling its magic, within 3.5 km from Karavostasis. The capital city of the island has a string of squares —a unique phenomenon in the Cycladic topography— for every hour of the day… Pounta square with staggering views to the “wildness” of Folegandros’ rocks for morning or afternoon photo clicks, Dounavi square of zen vibes, Kontarini square for delicious lunches and laid-back middays, and —last but not least— Piazza square for rounds of rakomela with friends in the evening. 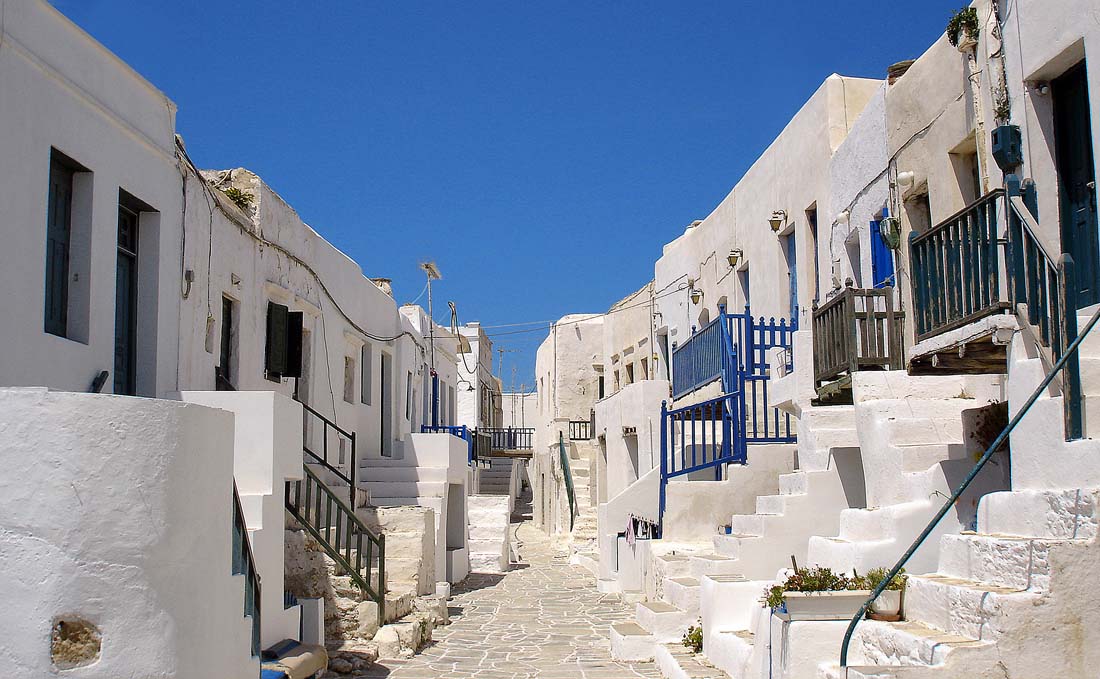 It feels like it was made for romance, for starry nights and long walks, for local legends and strolls in the paths of history. The medieval settlement of Kastro is the oldest, yet the most beautiful, part of Chora. The credit for its indisputable charm goes to Marco I Sanudo, who founded this citadel in 1215 in order to protect the island and its residents from pirate raids. The “masterpiece” of the Venetian ruler is renowned for its defensive medieval architecture, according to which houses were built next to each other, so that their thick external walls would also serve as the walls of the fortification. To enter the “sanctum” of a medieval district uninterruptedly inhabited for ten centuries, you must pass through Loggia, the main gate of Kastro. If you opt for the second, smaller gate, Paraporti, the cobbled path will lead you to the postcard-like Kato Roua, the most photographed spot of Kastro, with the typical two-story Folegandrian houses. Once you capture the residences-fortress walls with your camera, you can discover the only square of the settlement, just before you arrive to the courtyard of the all-white church of Pantanassa. 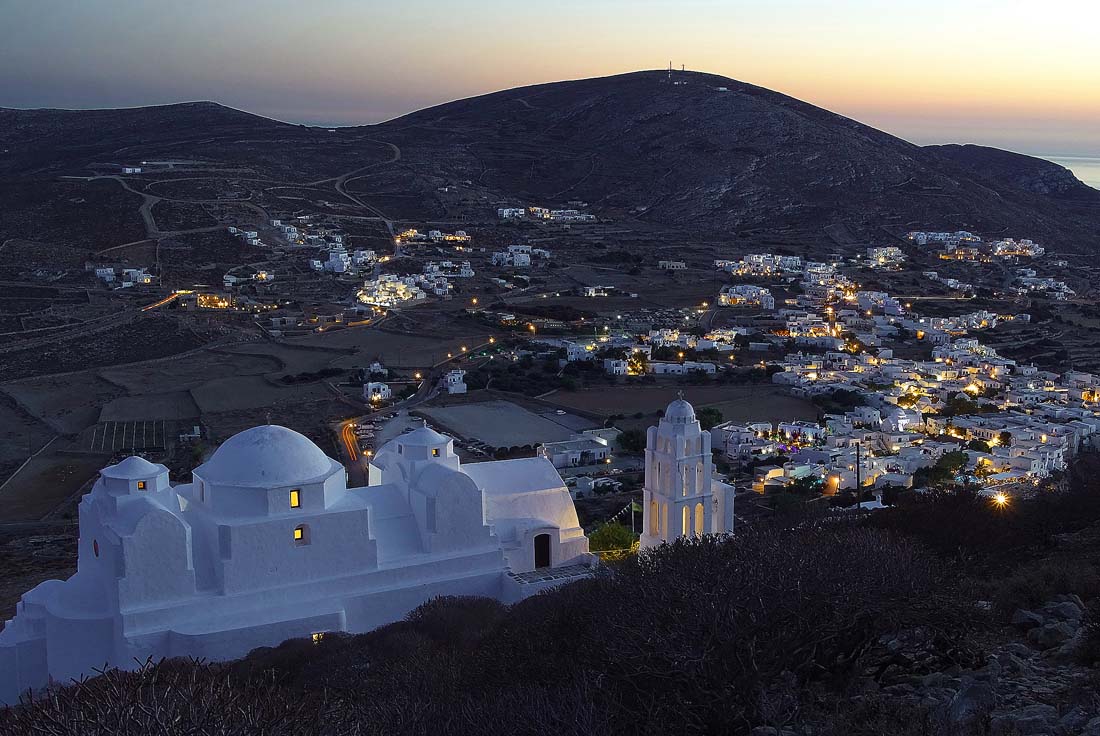 A landmark of Folegandros and a sunset balcony. Dedicated to the Dormition of Virgin Mary, the greatest church of the island is perched on the rock above Chora, overlooking from its steep observatory the sun, the sea and the land. It is said that the church was built on the site of an ancient temple, a theory further supported by the used building material. A female monastery in the past, Panagia was refurbished in 1687 and took its present form during its reconstruction period of 1816-1821. The interior and the courtyard of the church are home to ancient inscription, sculptures and bases of statues, but what truly leaves visitors in awe is the three cupolas (domes) —a multi-domed basilica is a sample of rare Aegean religious architecture—, the marble altarpiece, the arches and its high bell tower. There are many Panagia churches in the Aegean, but in order to reach this iconic one, you will follow the white cobbled upward path beginning from Pounta square at Chora (15΄). If you reach your destination before sunset, you get to watch one of the most mesmerizing sights in one’s lifetime. If it just so happens to be in Folegandros during Easter, you will have the opportunity to see the procession of the miraculous icon from door to door of every house of the island. 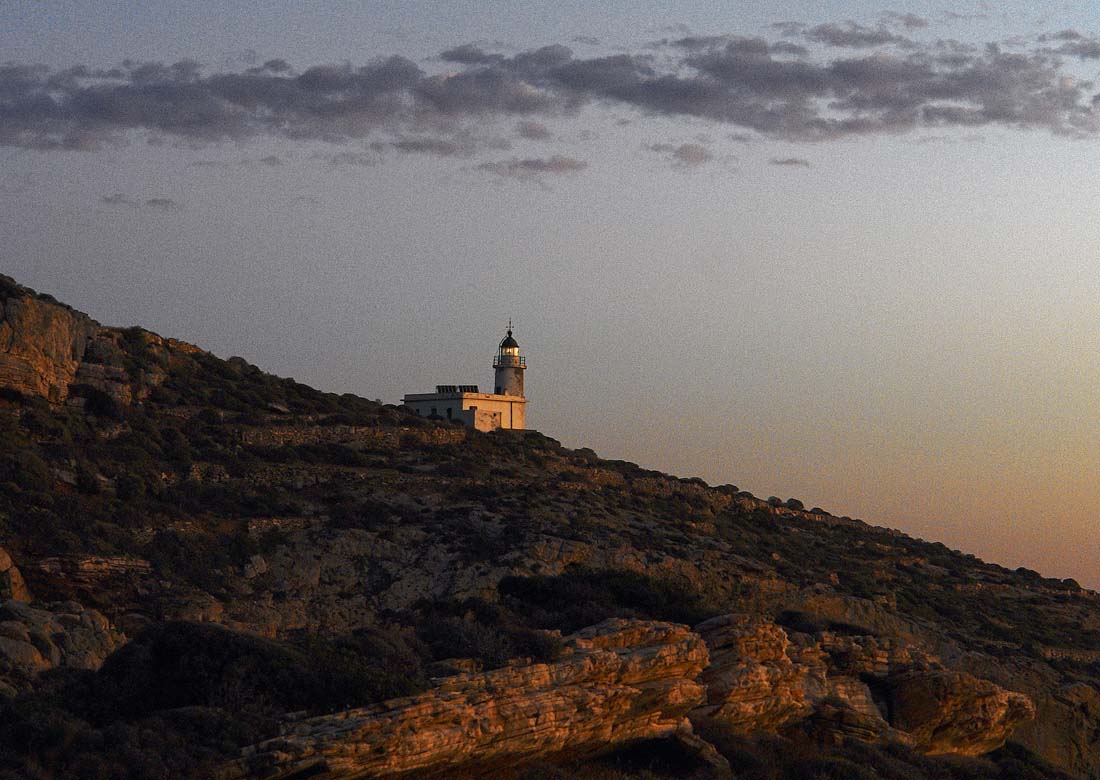 Folegandros, 1919. The Aspropounta Lighthouse is built 58 m above sea level. Its lantern is 11-meter tall and its light is visible up to 17 nautical miles. A simple fuse is enough to light the “way” of sailors… Eventually, fuses were replaced by a petrol mechanism, and electricity took over in 1968. Since 1986, it operates with solar energy. You can reach Aspropounta Faros on foot from the trail beginning close to Miloi at Ano Meria (a 60’ hike) or from Livadaki beach in 15’.

A traditional themonia at Ano Meria has been transformed into an open air Folk Museum, showcasing the way of life in a rural unit until the middle of the 20th century. Consistently following the model of an Ano Meria farmhouse during the 1940s’, it is divided in three areas: the main residence, the cellar and the oven. In Ecomuseum you will have the opportunity to see objects being used until 1950, as well as many peskesia (presents) of Folegandrian emigrants to their relatives and the sharecroppers of Ano Meria, discovering the distinct identity of the island. Opening hours: 17:00 – 20:00 (from 10/07 until 10/09).

If you are passionate about scuba diving or snorkeling, Folegandros gives you the opportunity to discover an extraordinary diving spot at the southeastern part of the island, close to Karavostasis. We talk about Georgitsi Cave, with a most impressive “sculptured” stony appearance, a rich underwater habitat and unforgettable reflections of light on its clear blue waters. Georgitsi cave can be accessed only by the sea and, more precisely, by boat from Karavostasis (10’). 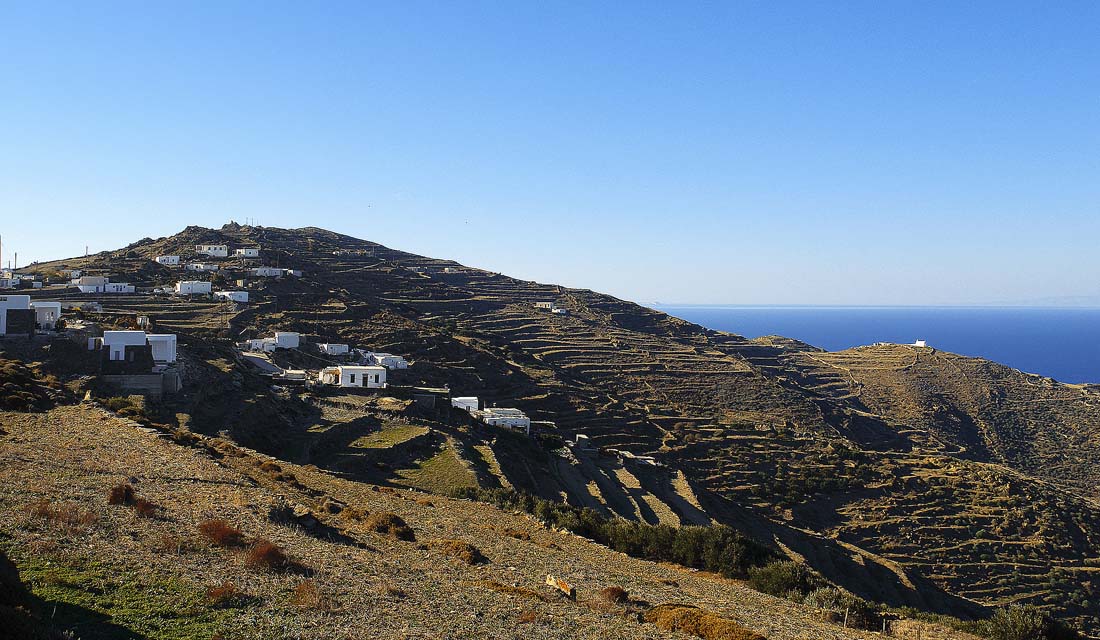 The second largest settlement of the island stretches along the northwestern coastline of Folegandros. This land seems untouched by the sands of time. As if decades decided not to take tolls on it, it continuously shows the same rural image and moves on the trails of tradition. Farmhouses, dispersed themonies (small autonomous units of agricultural and livestock production), lemonospita (rubble walls sheltering lemon trees from the winds), small threshing floors and terraces are the tiles of a vivid folk mosaic in perfect contract with modern lifestyle and novelty. Ano Meria is 6 km away from Chora.

This great natural monument at the northeastern cliffs of Folegandros presents significant speleological and archaeological interest. The hard-to-reach Chrissospilia is 300 m. long and has two main chambers, with a plethora stalactite formations and majestic colors. Almost 400 ancient male names were carved with a clay mixture on the cave walls and ceiling, dating back to the 4th century BC, presumably belonging to young adults who had managed to access Chrissospilia during a coming-of-age ritual. Other excavation findings include bones, seashells and carved Roman cisterns. One way to get into Chrissospilia is by the so-called “Greek steps”, built in the antiquity, yet the access is extremely dangerous, hence recommended only for experienced climbers. The cave can also be reached by the sea, weather and port authority permitting.