The once land of the hippie and party queen of the Aegean is changing. It matures, evolves, transforms, but still has so much to share. Ios, the island of Homer and the eternal blue, will stay forever young.

The Mediterranean moorings that once provided shelter to pirates today host luxury yachts, sailboats, fishing boats and liner ships that bring travelers to the island of youth. Gialos or Ormos is the second largest settlement of Ios, which spreads below Chora, around the harbor. It amazes with its excellent infrastructure, hotels, restaurants, cafes, bars, tourist offices and a quiet organized beach with crystal clear waters. At the right end of the harbor the imposing Byzantine church of Saint Irini has been welcoming travelers since the 17th century. 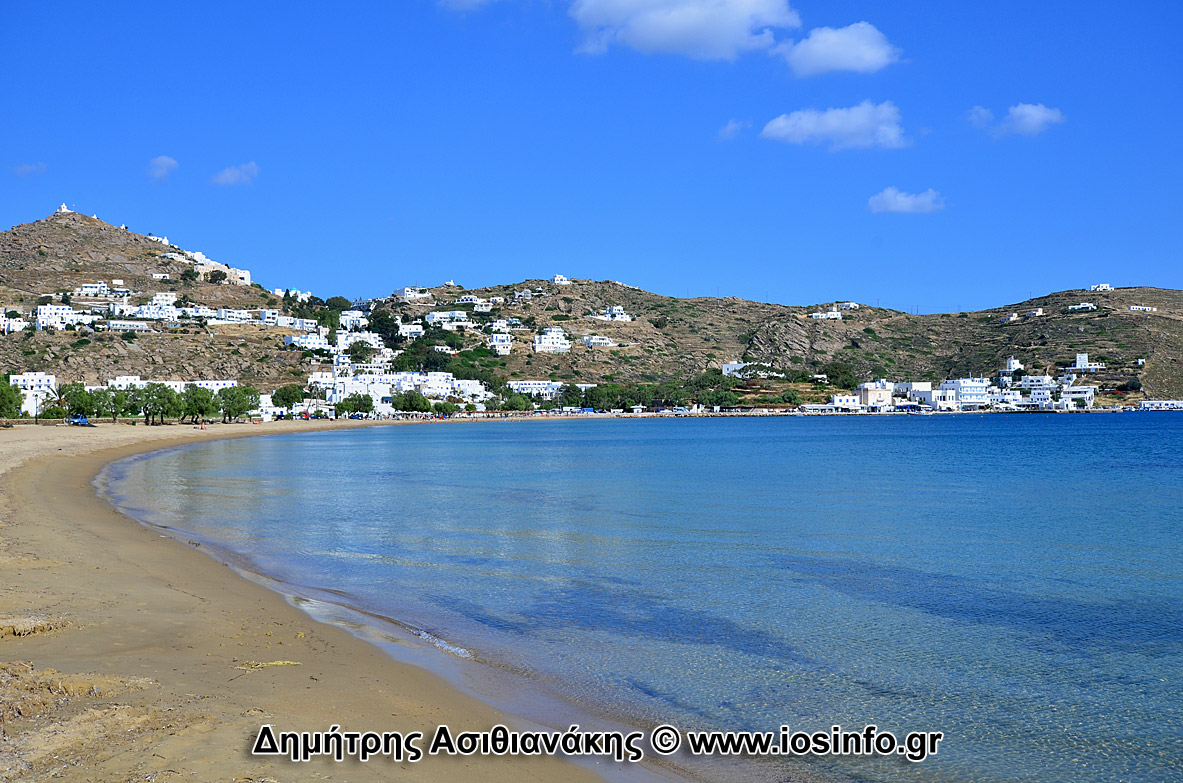 Perched on a rock above the bay, Chora astonishes with its excellent views of the sea and the harbor. A sole stroll here, in the capital of Ios, will be enough for you to fall in love with the place. The shimmering white, cobblestone houses, the labyrinthine cobbled streets, the private alleyways, and the colorful balconies make up the harmonious Cycladic outline of Chora. From the central square, one can reach the highest peak of the settlement and Panagia Gremiotissa, the most famous of the 365 churches of Ios. According to tradition, the Virgin Mary indicated the exact location for the temple on the edge of the cliff. From this point the panoramic views of the Aegean Sea, over the white houses of Horio and Ormos are in one word striking. Looking even higher, you can see three more churches that overlook the beautiful town: Saints Eleftherios, Georgios and Nikolaos. Below the chapel of Agios Nikolaos you will see traces of the cyclopean walls of the ancient city. Moving to the lowest side of Chora, towards the Amoiradakeio Megaron, which hosts the City Hall and the Archaeological Museum of Ios, you travel through history: First by relishing important findings from the early Bronze Age and the Early Cycladic settlement on the hill of Skarkos and later exploring the innumerable bars, restaurants, hotels and more. 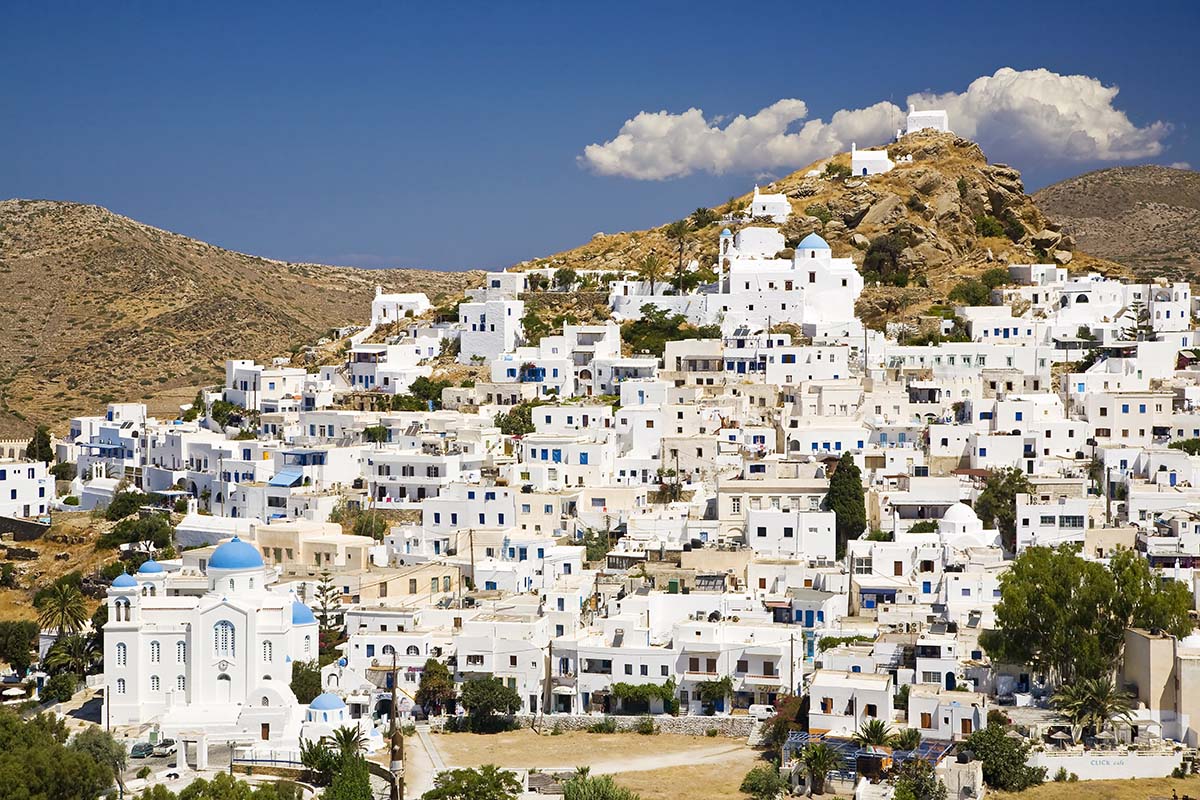 From Epano Piatsa, one can easily reach the plateau with the windmills, on the east of the traditional settlement of Chora. The twelve mills are found on the hillside, set in two rows, reminiscent of past glorious times, when the grains of the island were ground with the power of the winds. Two of them are renovated and open to the public, giving visitors the opportunity to experience their interiors. The road that leads to the Tomb of Homer passes near the area. 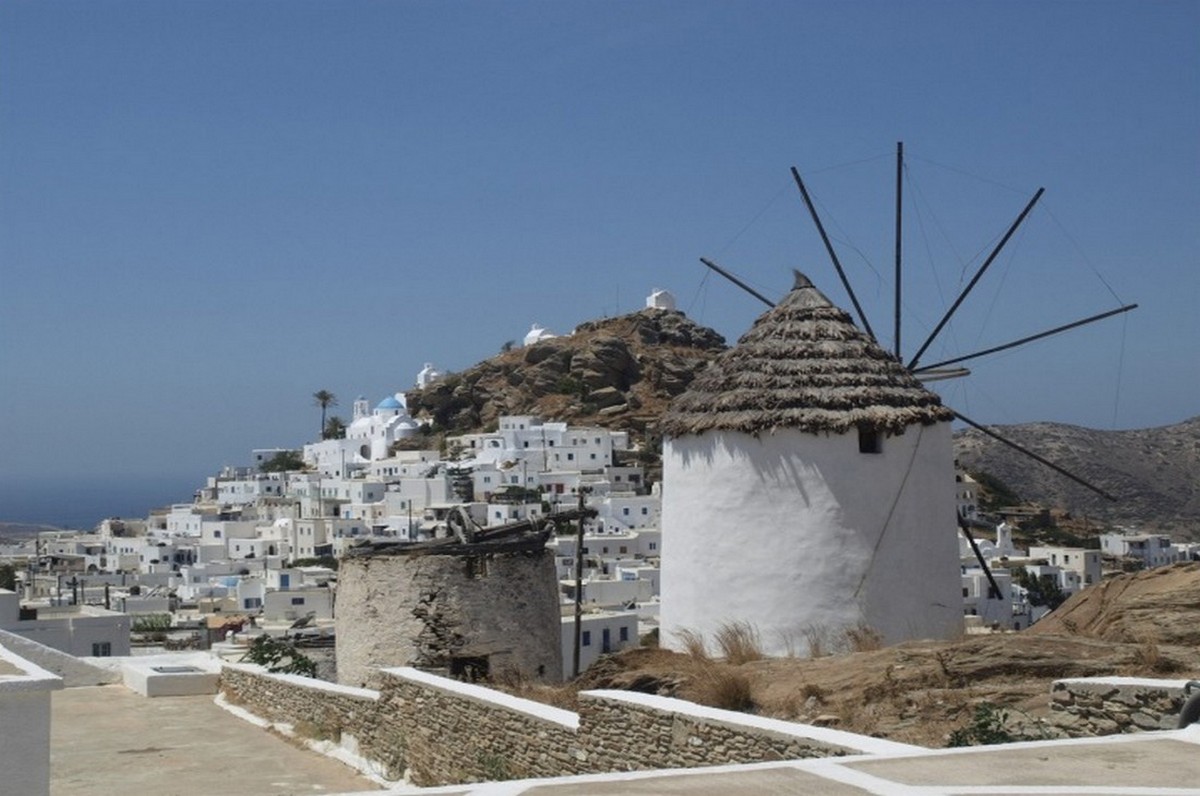 THE TOMB OF HOMER

From the windmills, follow the asphalt road leading to the northern side of the island, Plakoto. Above the homonymous beach, in the middle of the Aegean, there is supposed to be the resting place of Homer. According to legend, the ancient epic poet died and was buried in Ios, home of his mother Klymeni, as reported in texts by Herodotus and Pausanias. Another legend states that the ancient epic poet died from his distress when he could not solve a puzzled given by the local fishermen. Although many scholars dispute over the origin of the ancient epic poet, most agree that he died and was buried in Ios. In fact, coins of the 3rd and 2nd centuries BC were also found at this point with the form of the poet on one side. Another archaeological theory suggests that it is not a burial monument but a Hellenistic tower. 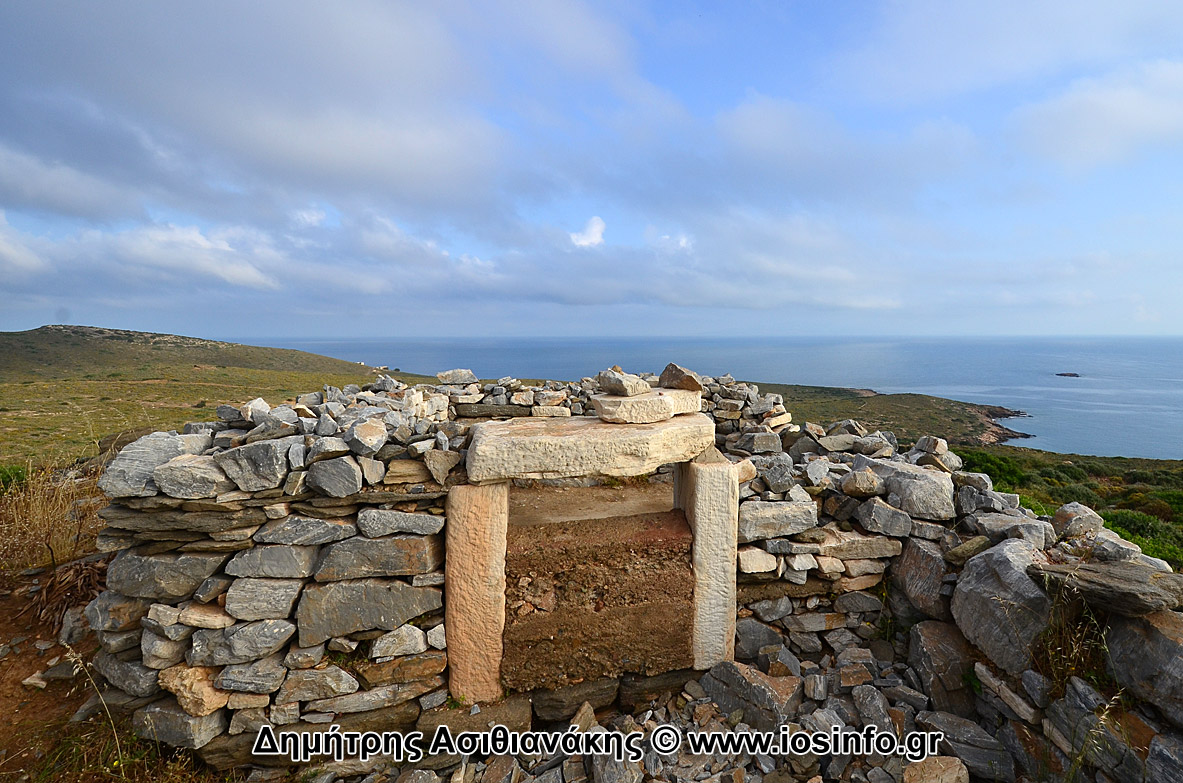 This open-air theater is one of the most beautiful locations in Ios with beautiful views of the Aegean, full of colors and perfumes. The German architecture professor Peter Haupt demonstrated his love for Ios by designing a copy of an ancient Greek open theater, similar to the ones in south Italy, and making Tsoukalaria a popular destination. Built with marble and local stone, it includes a circular orchestra with a diameter of 40ft and 1100 south-facing seats and hosts a number of cultural events, like theatrical performances and concerts for the summer Omireia. 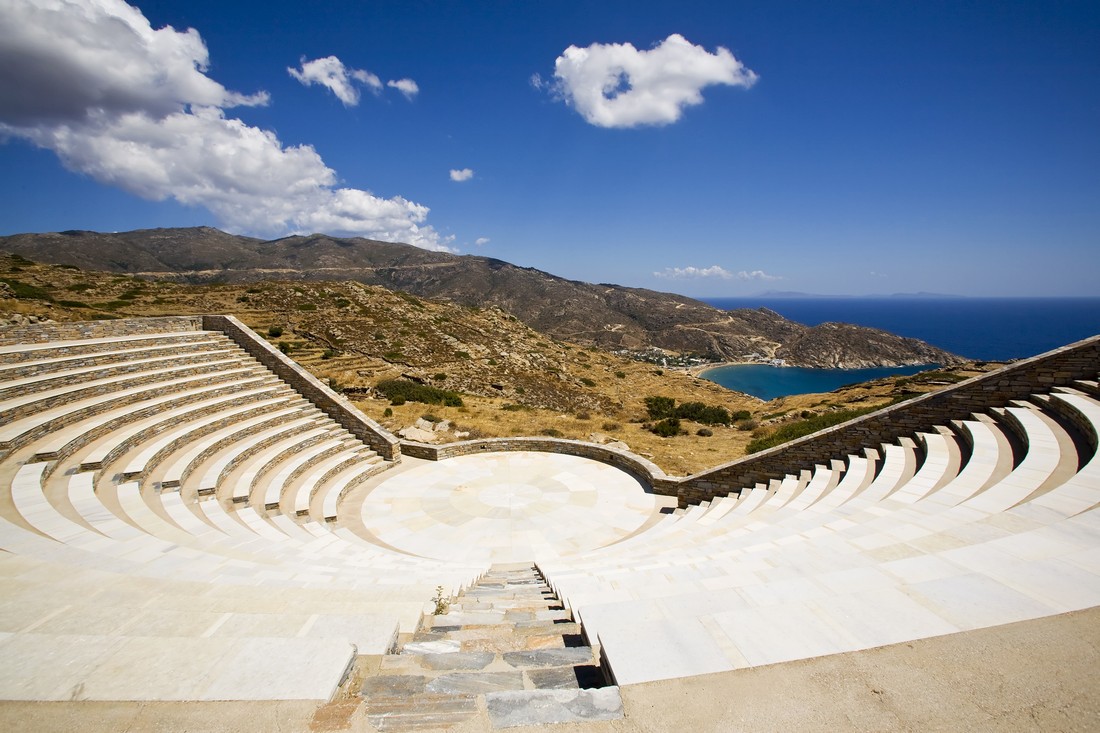 A private museum near Mylopotas, housed in the mansion of Jean-Marie Drot. In 1964, the French philhellene built his home in Ios and in 1993 he added a museum of modern art that hosts paintings and works of art both from Greece and abroad, namely from France, Poland, Italy, Haiti, etc. The visitor here will also admire sculptures, engravings, photos, folk art and furniture from Cyclades and other parts of Greece. It only operates during the summer months. It is located in Kolitsani / Mylopotas and is accessible via a walking trail. 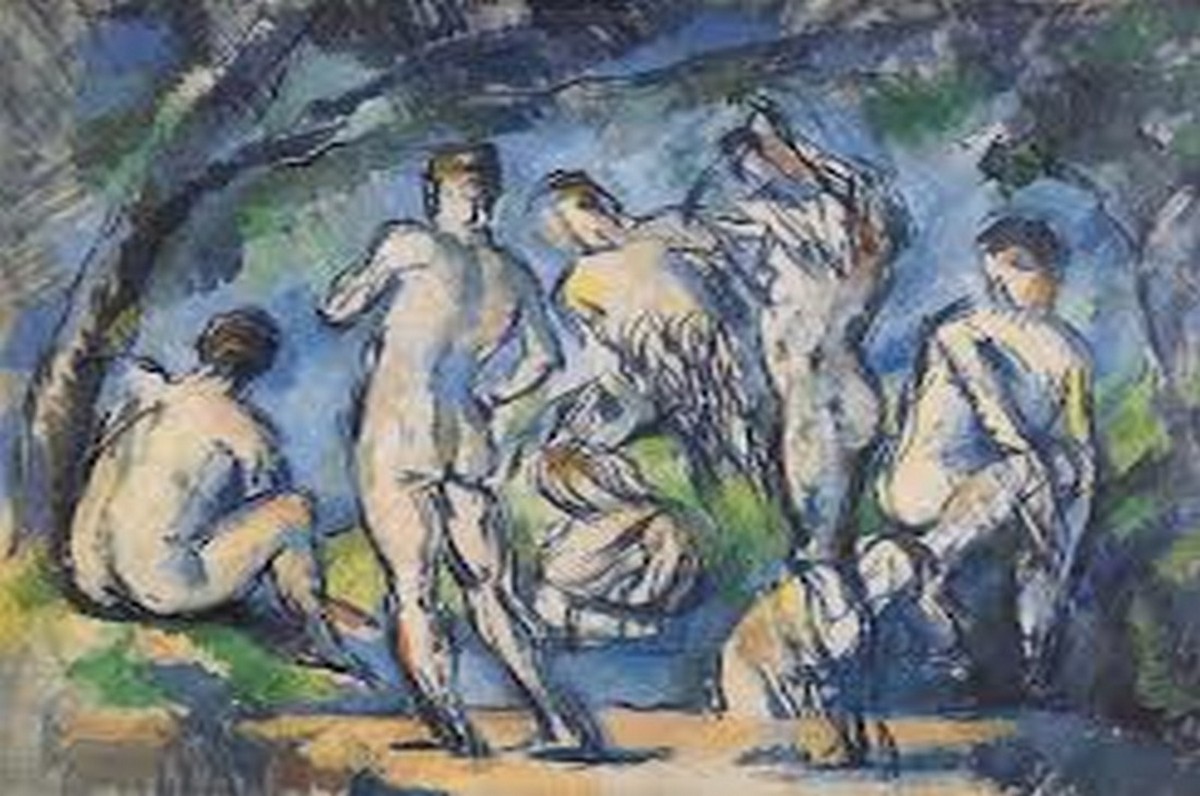