In the volcanic island of Santorini, you will live unique experiences with excitement and passion. A cruise to Nea Kameni, hiking around Caldera, staying in a rock-hewn lodging, watching the sunset from Oia, wine tasting of Santorini varieties and a visit to the archaeological site of Akrotiri aren’t but a few of the must do in this place of rare beauty. Here is what you should definitely do while in Santorini:

1.Cruise to the volcano

A trip to Santorini equals a visit to the volcano! If you want to walk on the black ground of the active volcano of Santorini and feel the heat and the smell of sulfur following you in every step, then you should definitely embark on one of the ferries departing from the old port of Fira and heading to Nea Kameni. In this islet, which was born from the Minoan eruption, you will see the biggest crater of the volcano. The active fumaroles, black-red volcanic rocks, vibrations of the ground and views to the settlements of Caldera will leave you in awe. During the one-day trip, ferries also stop at Palea Kameni, giving you the chance to dive in the hot sulfur springs of Agios Nikolaos. It’s magic!

2.Admire the legendary sunset of Santorini

“Armies” of people gather on a daily basis to the most unlikely high spots in Caldera, such as terraces, church domes and rocks, to enjoy the ever-recurring afternoon “show” of the sun. Visitors from all over the world meet at Kato Fira, Firostefani, the Castle of romantic Oia and Skaros Rock in Imerovigli, to capture the legendary sunset of Santorini and enjoy a unique life experience. No wonder, considering that the National Geographic magazine has proclaimed it as one of the best worldwide. Here, at the most southern tip of Cyclades, the dip of the sun behind the volcano is a spectacular sight. The red disk takes on the volcanic lava tinge, slowly drifting into the horizon and painting the Aegean Sea with multiple shades of purple. The pristine white settlements of the cliff seem whiter, the small churches seem brighter, the deep blue seems deeper, and the scenery looks cinematic. Couples in love and not only savor the mesmerizing moments of sunset in awe, while some enthusiasts keep the tradition of applause during the peak of the phenomenon. 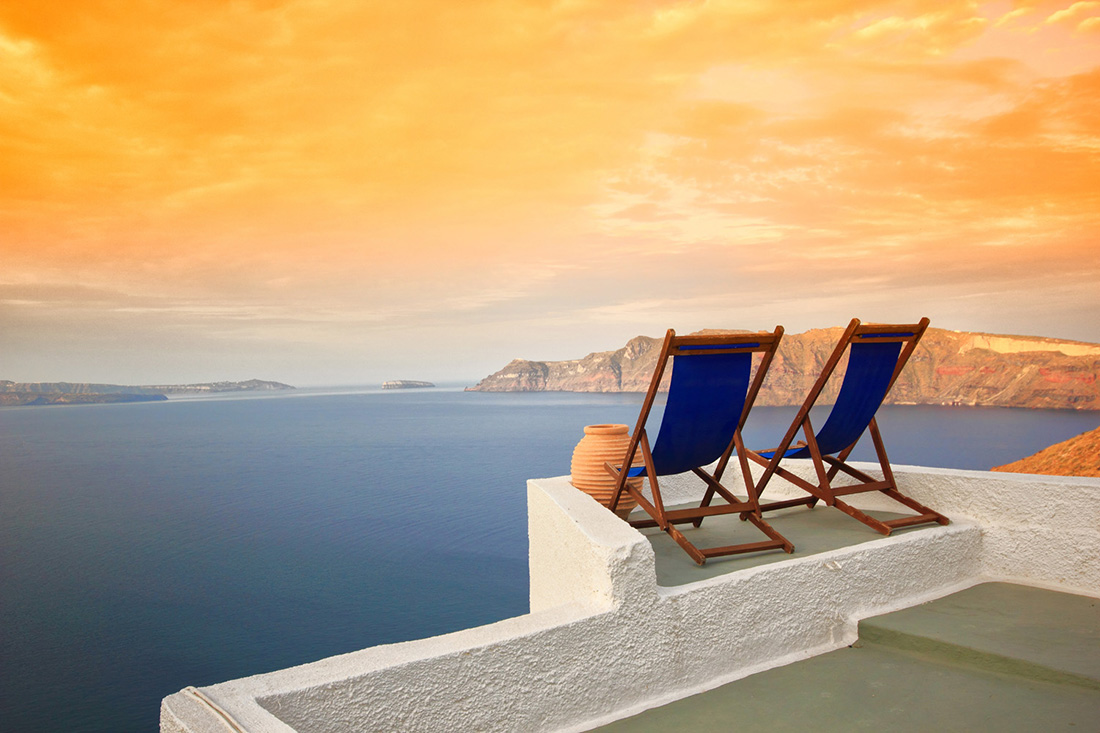 Skaros in Imerovigli was the most significant of the five fortified settlements of Santorini, as well as the capital of the island until the 18th century. The ruins of the medieval citadel are perched on a steep rock 330 m above sea level. A part of its fortress still stands on the top of the rock, attracting those who seek a different viewing angle of Caldera and an alternative, quiet spot to watch the sunset. 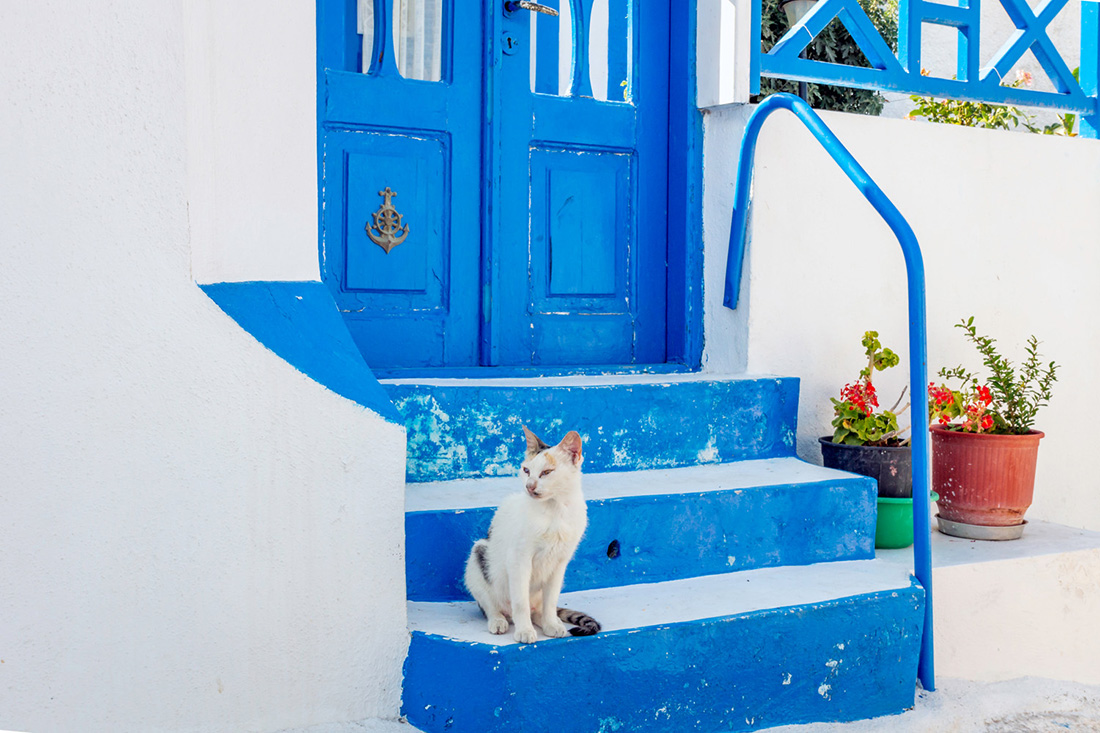 4.Visit Akrotiri, the Pompeii of the Aegean

Akrotiri, 15 km from Fira, is one of the most important archaeological sites in the Mediterranean. The systematic excavations that started at the southwestern tip of the island back in 1967 by Spiros Marinatos and were continued by Christos Doumas revealed the prehistoric settlement of the area, which was evacuated because of the earthquakes that preceded the great volcano eruption. The volcanic pumice covered a great civilization at its peak, thus burying streets, multistoried edifices, workshops, houses and squares. The guided tour in the archaeological site of Akrotiri is an amazing experience, as you can see the prehistoric town almost untouched, just as it was after the earthquakes and before the volcano’s eruption, while the saved wall paintings, the vessels, the fabrics and the storage containers offer a glimpse of the inhabitants’ life of the of that era. Finds from the Akrotiri settlement are on display at the Museum of Prehistoric Thera in Fira. There are ongoing excavations, since archaeologists have brought only a part of the settlement to light.

5.Hike on the trails of Caldera

The best way to embrace the Caldera magic to the fullest is probably hiking. The old cobbled trail connecting Fira to Imerovigli and Oia includes areas with breathtaking panoramic views, rock-hewn chapels and quaint settlements at the edge of the cliff. The route covers 9 km and requires almost 3 hours of hiking. 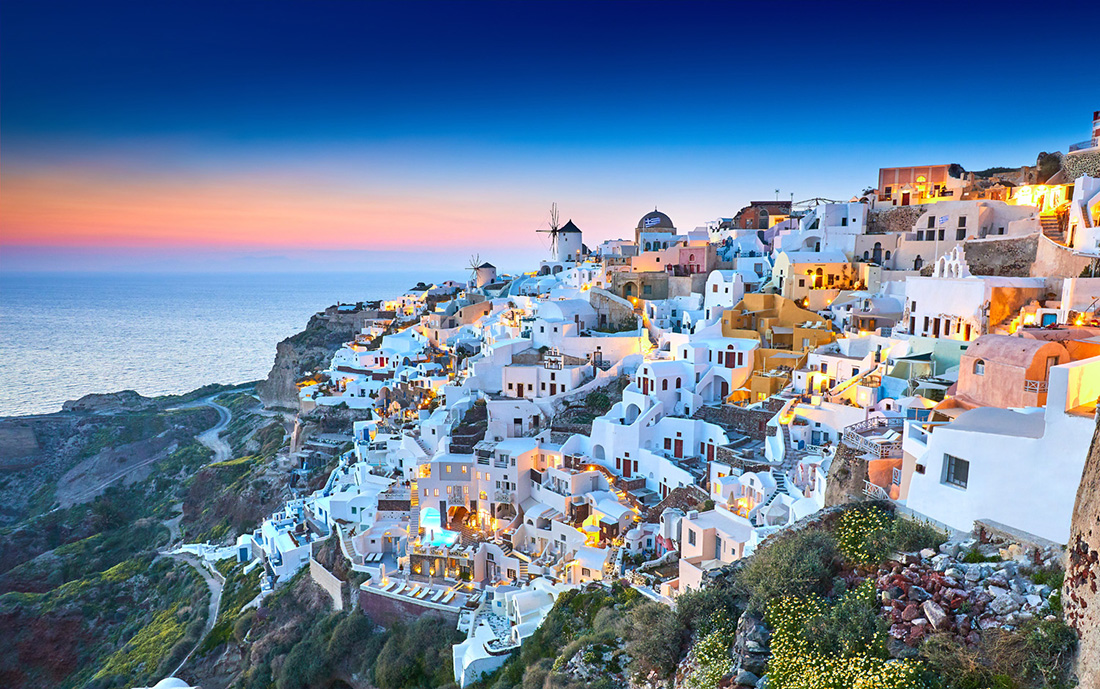 6.Stay in a rock-hewn lodging

Rock-hewn lodgings of Santorini are the main characteristic of local architecture, and staying in their interior is a unique experience. Although these constructions used to be the homes of the economically disadvantaged families of Santorini, now many of them have been turned into luxurious boutique hotels promising unforgettable hospitality. Rock-hewn lodgings have dome-like ceilings, narrow façades and great depth but no foundations, and the materials that are used for their construction are Santorini earth, black or red stone and limestone. You can find cave-like rock-hewn lodgings in Fira, Oia, Pyrgos, Emporeio and Akrotiri. 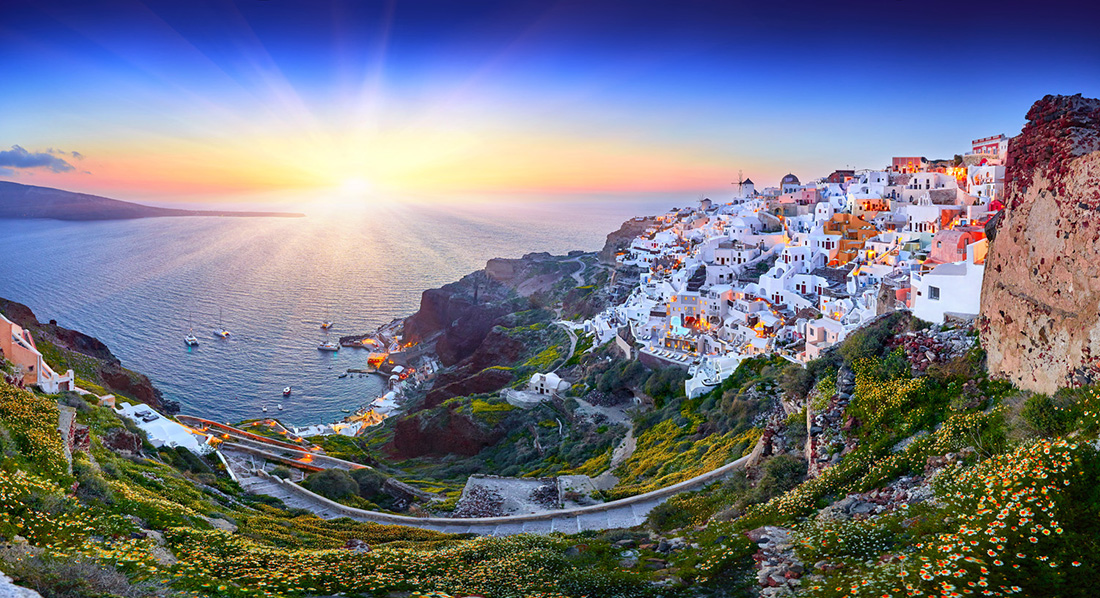 7.Get acquainted with volcanic beaches

The Minoan eruption of the volcano has blessed Santorini with beaches of rare beauty. Black, rugged, rough, almost eerie and volcanic, the beaches of the island are a pole of attraction for visitors from all over the world. A worthy representative of this untamed charm is Vlyhada beach. As chiseled by a god’s hand, with black sand and rock formations sculpted by the winds and the sea, it is strongly reminiscent of a lunar landscape. The scenery changes color in Kokkini (Red) Beach: red steep rocks, red pebbles, red sand. If you decide to reach this area by hiking the bumpy trail that begins from Akrotiri, you can do it at your own risk due to often landslides and an increased probability of accidents. Other equally stunning beaches with black sand and volcanic character are Kamari (organized beach, with bars and restaurants), Perivolos (a glamorous swimming spot, with open-air beach bars and deep sea) and Perissa (the most famous beach in Santorini, with a variety of choices in water sports). 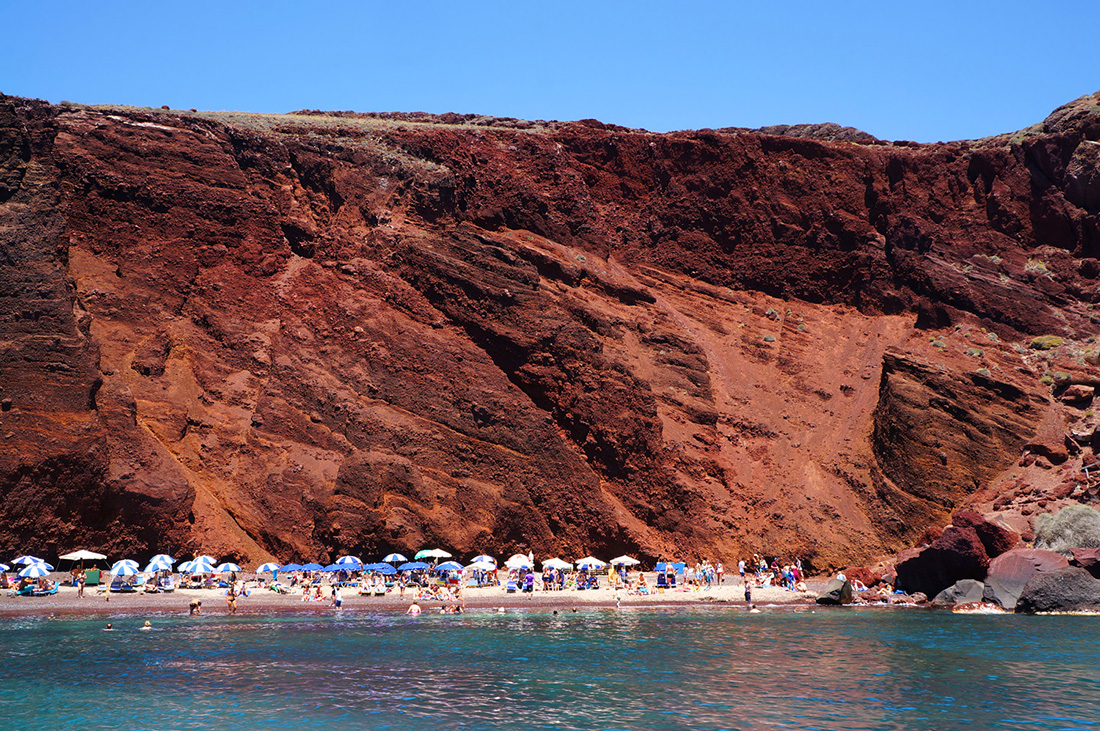 8.Indulge in wine tasting at the wineries of Santorini

The ancient volcanic vineyard of Santorini occupies almost 4000 acres of land and is considered the oldest in Europe. The grounds of the island are perfect for the indigenous varieties of Assyrtiko, Athiri and Aidani white wines, while as red are concerned, Mandilaria, Mavrotragano and Boudomato are cultivated, producing wines with distinctive characteristics. In the visitable wineries of Santorini you will have the opportunity to learn more about the centuries-old winemaking tradition of the island and taste internationally acclaimed and multi-awarded wines, such as the sweet Vinsanto (white or red), Nykteri (white dry wine) and Brousko (high-acidity red wine). 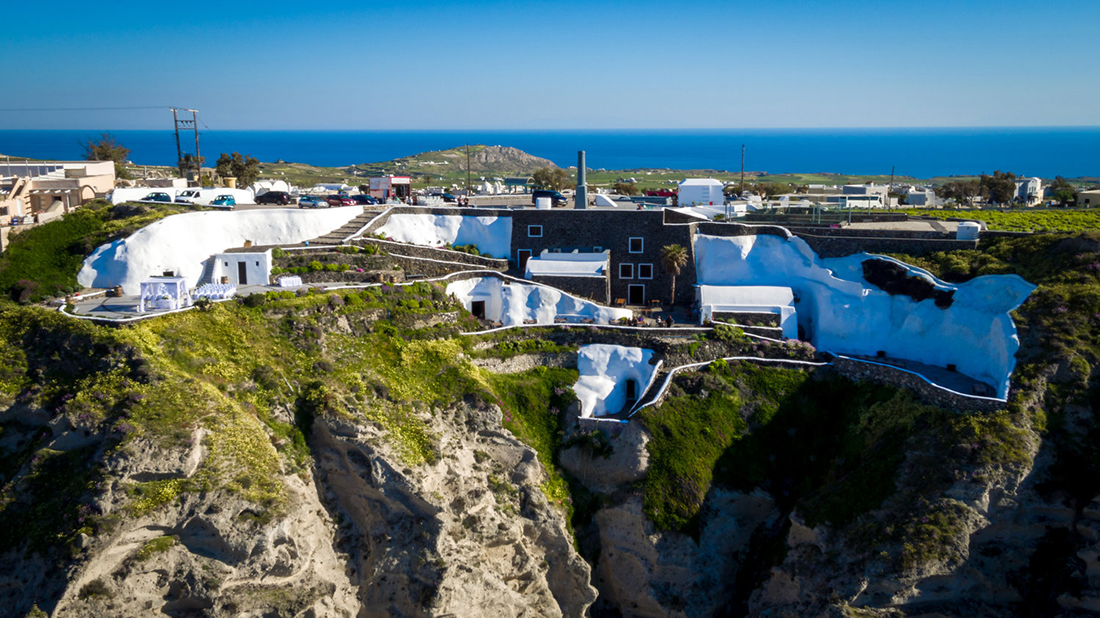 9.Get a taste of Santorini’s cuisine

The great culinary legacy of Santorini and the quality of its local products reach every place of the Earth through the gastronomic experiences of thousands of visitors arriving at the island of the volcano. Gourmet restaurants, traditional taverns, wineries and traditional product shops are the ambassadors of a delicious local cuisine based on the exceptional goods of the Santorini terroir. Fava (a split peas variety), white eggplants, Santorini’s cherry tomatoes, hearty fried tomato balls, “chloro” cheese, barley rusks, caper and small sweet cucumbers called “katsouni” are served on Santorini tables the classic way, as well as in modern versions, revealing the creative mood of the chefs of the island, who showcase the local raw material in the best ways. Always accompanied by an Assyrtiko or a sweet Vinsanto. 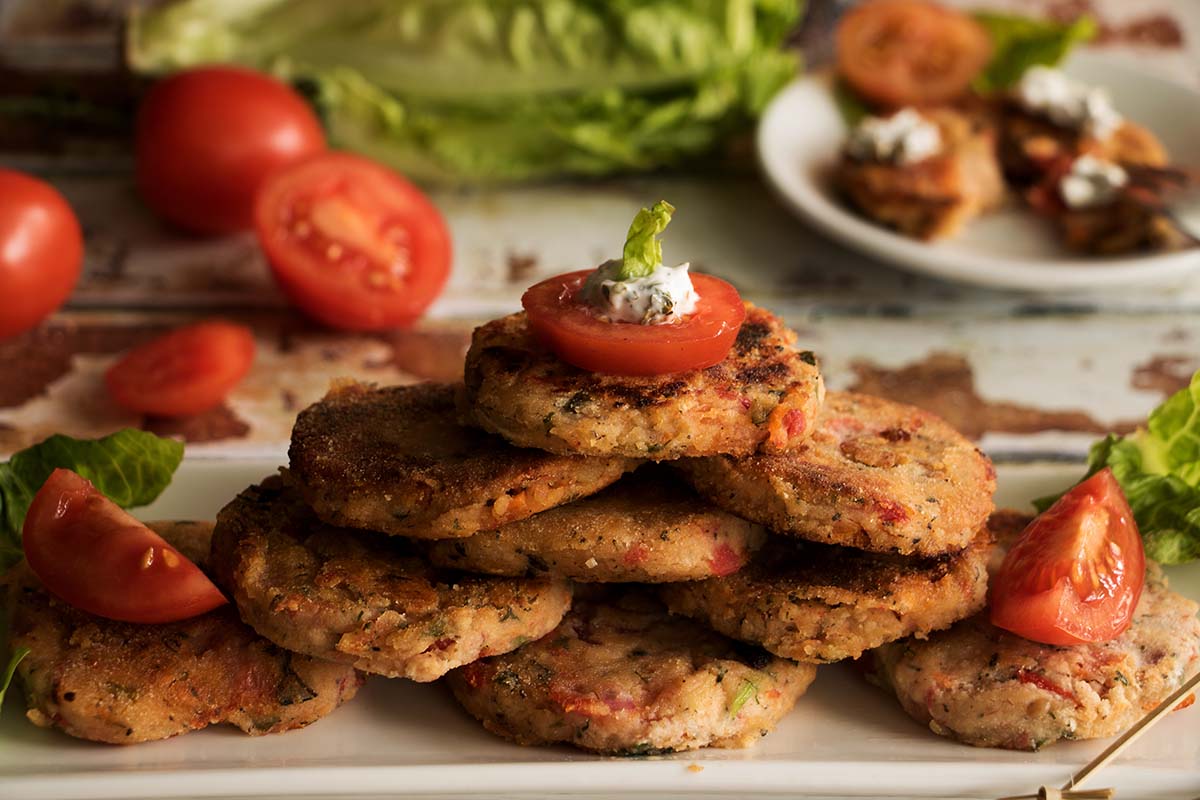 10.Walking in the old canava village of Finikia

Right before Oia, Finikia looks like a painting surrounded by the vineyards of the area. The traditional settlement winking at Baxedes was a village of vine growers, farmers and people of the plain, which boasted 150-200 canaves (old wineries) during its peak. Follow one of the picturesque alleys lined with black stone walls and huge prickly pear cacti, to discover colorful neighborhoods with rock-hewn houses, secret courtyards and terraces where people used to dry figs and grapes under the sun. Don’t forget to stop by the courtyard of Agia Matrona church with the distinctive palm tree and the wonderful view. 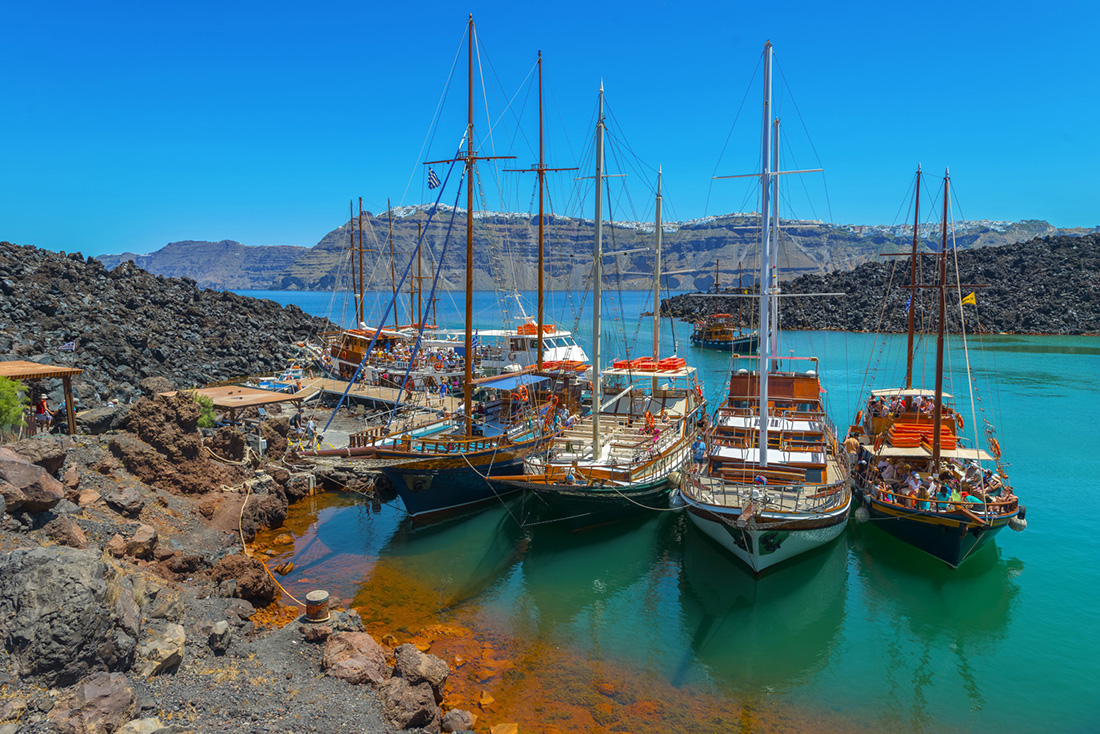