A short trip to the aristocratic Ermoupolis and the medieval Ano Syros, home to Markos Vamvakaris and origin of San Michali cheese. 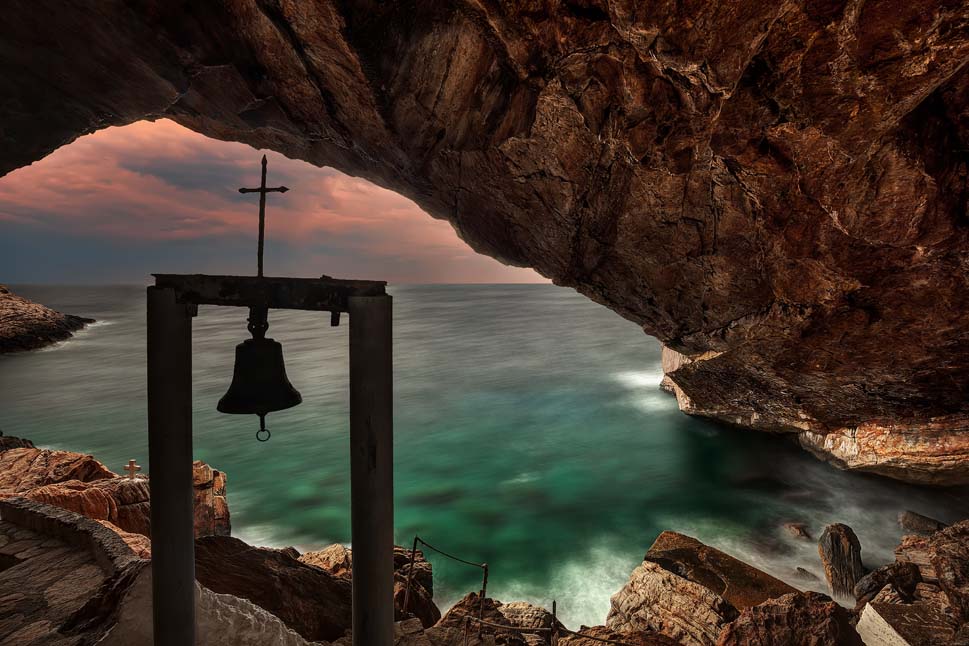 Syros dominates the heart of the Cyclades as a true Aegean duchess. Despite being a relatively small island, with an area of 32 square miles, it is the most densely populated island of the Cyclades and manages to remain vibrant all year round. But that’s not all. Syros is an alliance of social classes and cultures; the West and the East; Orthodoxy and Catholicism. It is the 19th-century middle class, Syros of commerce, industry, shipping and literature. ‘Greece was reborn in Syros’, Eleftherios Venizelos once said, depicting in five words the greatness of the island. 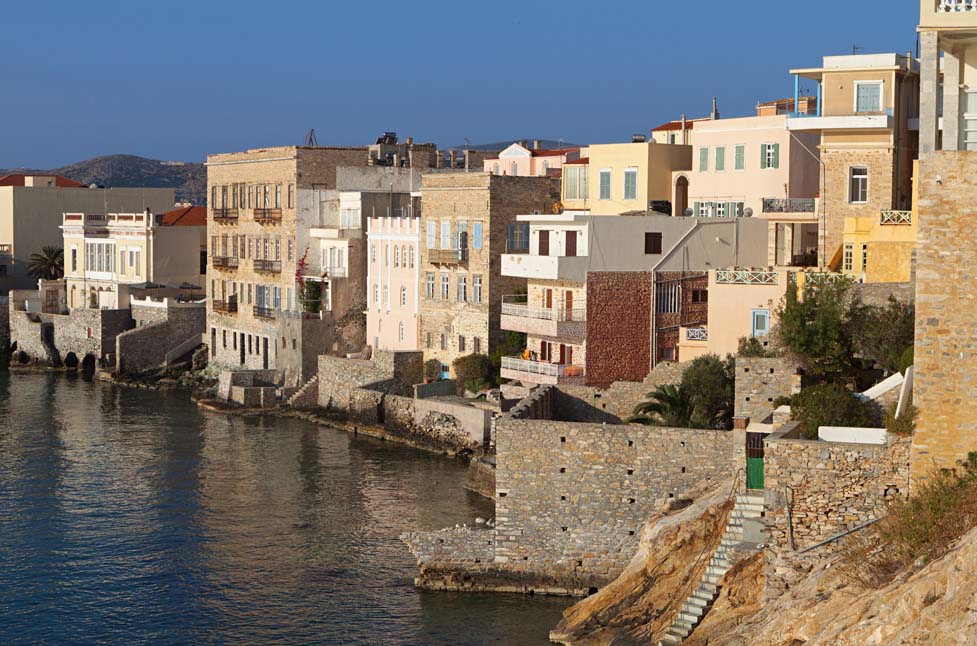 Development, progress, culture and wealth have been the main characteristics of Syros since 1826 when the experienced refugees from Psara, Chios and Smyrna, rich and poor, created the economic and cultural miracle of that time, Ermoupolis, the capital of the island the first industrial centre and port in Greece with a reputation equivalent of European cities. Strolling around the prominent city, you’ll recognise the glory of the past in the imposing neoclassical buildings and the old mansions that dominate the famous aristocratic district of Vaporia, making a short but wonderful journey in time. 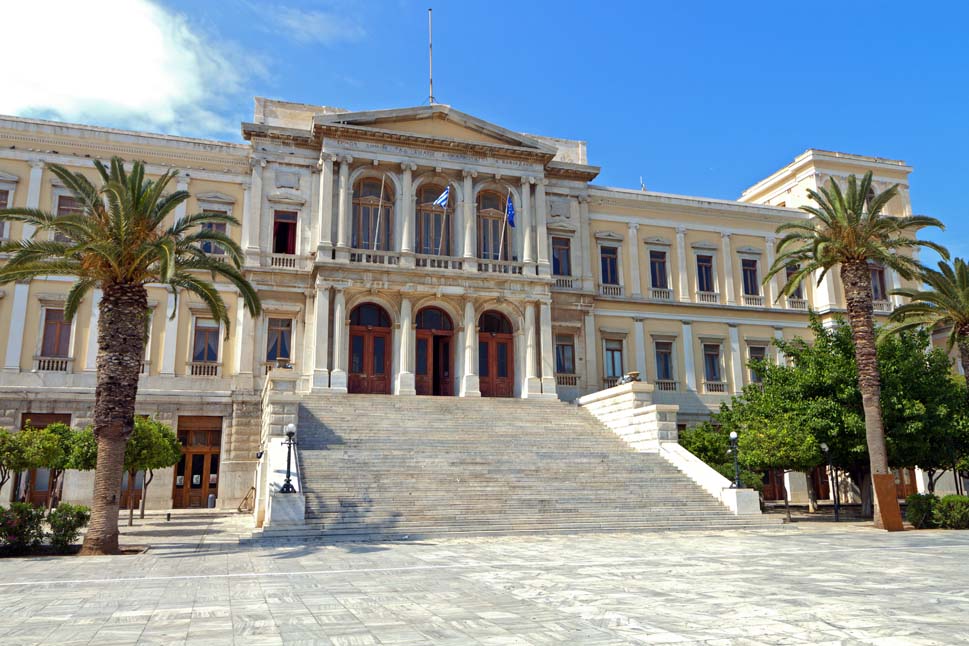 The capital of Syros, Ermoupolis, a real gem of the island and the administrative center of the Cyclades, exudes a breeze of romance and aristocracy with its neoclassical buildings and its picturesque cafés. The first landmark one should definitely visit is the impressive Syros City Hall, designed by the German architect Ernst Ziller, which has dominated the historic Miaoulis square – one of the largest marble-covered squares in Greece – since 1898. Another significant attraction of the city is the Apollo Theatre, an extraordinary building of 1864 that is a miniature of the Milan Scala. Apollo’s stage has hosted great operas and operettas, and is currently holding local amateur theatrical plays, cultural events and the annual ‘Ermoupolia’ summer festival. 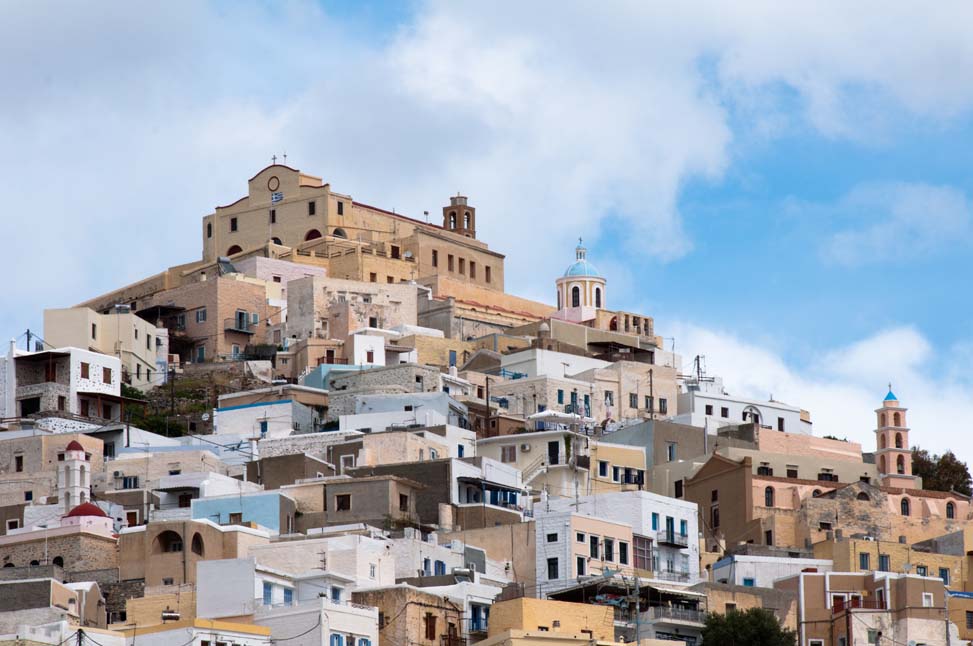 The medieval settlement of Ano Syros is just 2.2 miles from the port of Ermoupolis and overlooks the center of the capital of the island. Passing the gates of the old castle, the so-called Kamara, an old era comes to life and overwhelms the visitors with a combination of Venetian elements, echoes of Vamvakaris’ melodies, and scent of traditional local delicacies. Choose a tavern and enjoy tasting the traditional Syros dishes, such as caper salad, parsley salad, atherinopita – a sea food pie, octopus balls, sun-dried fried in batter tomatoes, quince and meat stew, sausages and pork with cabbage and fennel, fresh fish cooked with dry capers and delicious figs bars that pair perfectly with tsipouro and local San Michali cheese. After this delicious break, you can wander through the labyrinthine narrow cobbled streets and reach the highest point of Ano Syros, the hill where Saint George church has been located since the Middle Ages. It is the Catholic Cathedral of Syros, originally built around 1200, and is the largest and most majestic Catholic temple on the island. 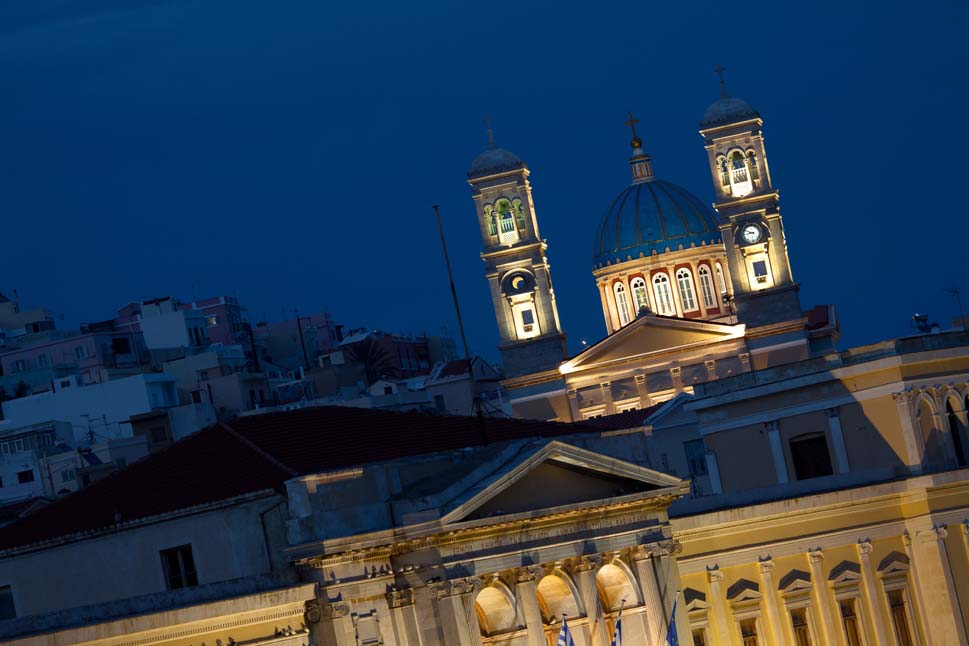 Syros is a brilliant example of multiculturalism and acceptance of diversity. True to both the doctrines of Christianity, Orthodox and Catholic, the two have coexisted for centuries on the island despite any religious differences and beliefs, making them an imitable example. Easter in Syros confirms the above and is an utterly unique experience. In the capital of Syros, the Orthodox and Catholic Easters are celebrated simultaneously (regardless of the date of the latter) with special permission from the Pope in a unique atmosphere of devoutness, unity and love. 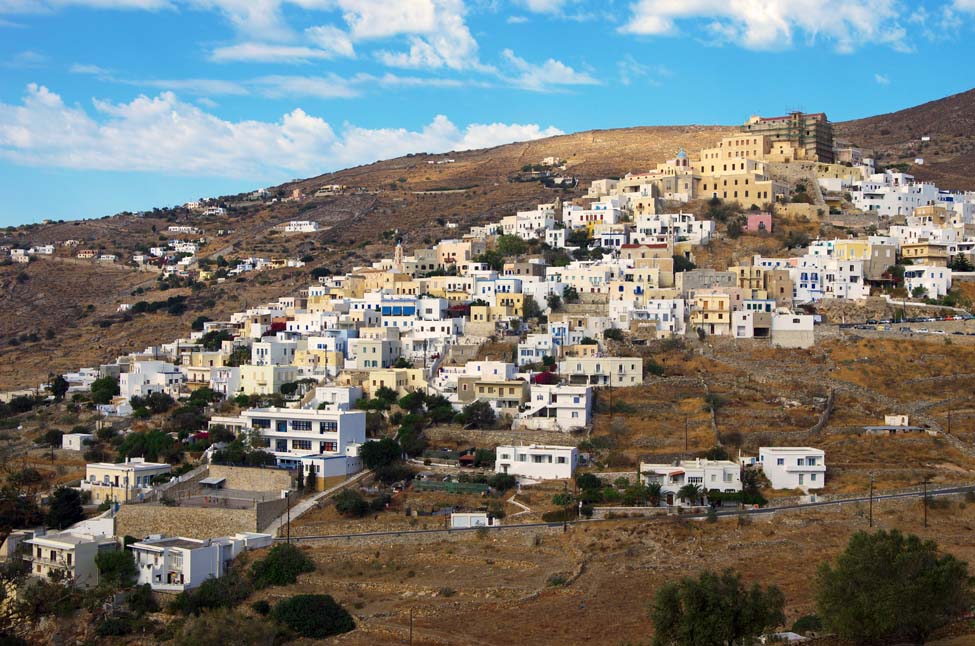 As the birthplace of Markos Vamvakaris, Syros could not but pay tribute to the great composer and creator of ‘Fragosyriani’ with the foundation of a museum devoted to his life and work. Markos Vamvakaris Museum has been housed in a renovated two-storey residence of Ano Syros since 1995, giving the admirers of the rebetiko ‘patriarch’ the chance to see photographs and personal items, manuscripts, lyrics, clothes and shoes (Markos Vamvakaris had about 50 pairs!), his personal identity card, his watch and his wedding ring, tools, as well as many personal items granted by his family.

After completing a visit to Mark Vamvakaris Museum, you feel ready for a road trip to the northern part of the island. Behind the hill of Saint George, the road continues towards the mountains of Syros. Following a road to Ano Meria and driving against a background of a rugged mountainous landscape with terraces, dry stone walls, steep rocks and scents of thyme, you reach the ruined village of Agios Michalis or San Michalis (3 miles from Ano Syros) which gave its name to the PDO San Michali cheese, with its unique spicy flavor. 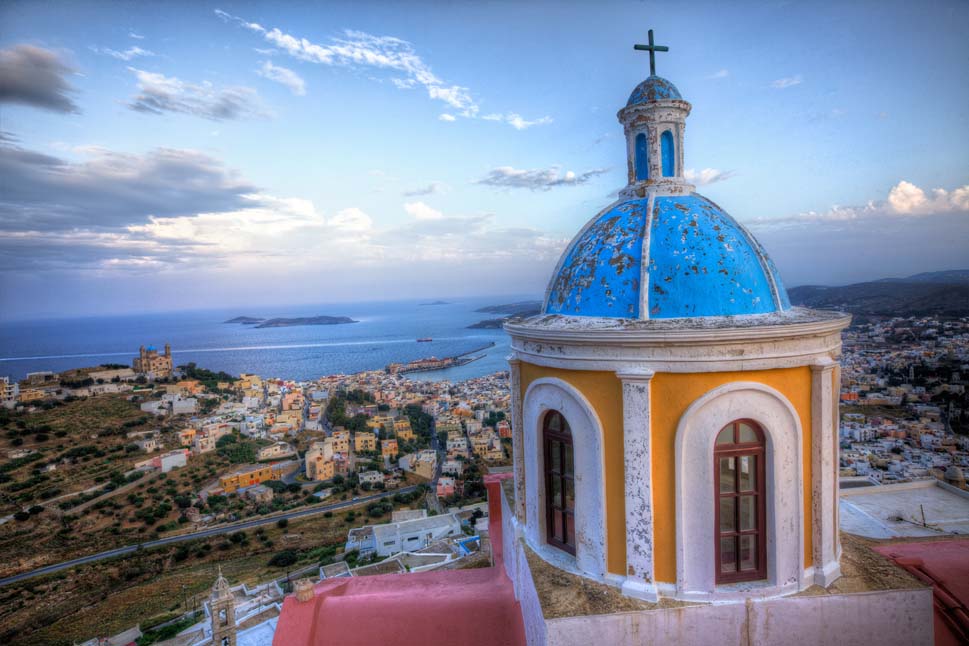 Walk the narrow streets among the abandoned houses and reach as far as the edge of the settlement to see the vastness of the Aegean Sea and a purple sunset, identical to Santorini’s. Discovering Ano Meria by car, in addition to the beautiful view of the endless blue, gives you the opportunity to enjoy settlements such as Mittakas, Papouri, Richopo and Plati Vouni. The archaeological sites of Halandriani, Kastri and the Grammata are also located in the area. 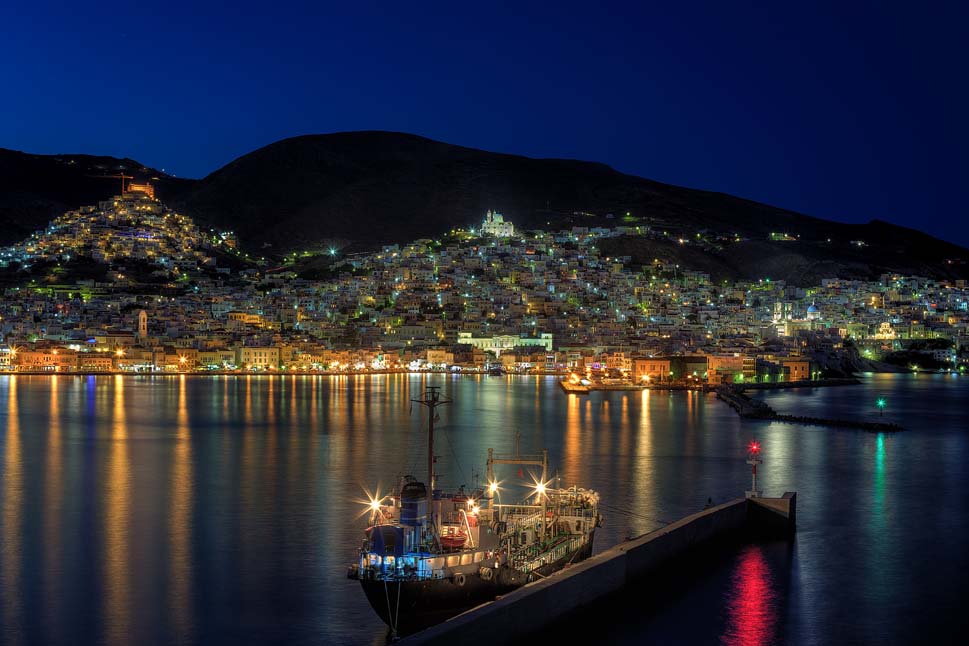 Upon returning to Ermoupolis, you are eager to try halvadopita (nougat pie) and the famous Syros loukoumi, and prepare your night out. The night life in Syros is in no way inferior to any of the other cosmopolitan islands of the Cyclades. However, the rhythms here are more relaxed and you can comfortably enjoy your drink without fighting the summer crowds of other islands. In Ermoupolis you will find atmospheric cafés and alternative rock bars, the beach bars along Posidonia and Galissas beaches, while Ano Syros will lure you for some authentic rebetiko music.